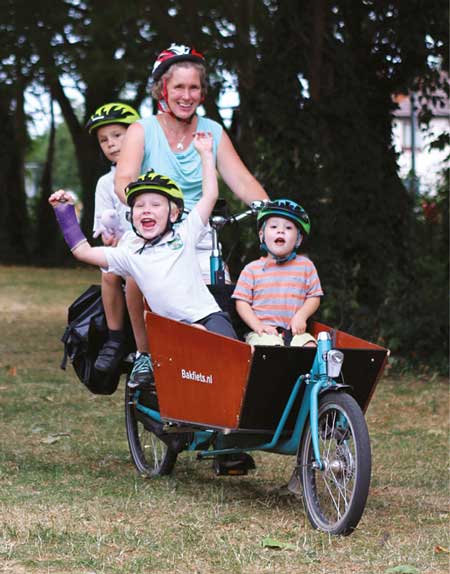 Picture the scene: a cold dark evening, three tired children after school and swimming lessons, one tired and somewhat grumpy Mummy. And a 1.5 mile walk home or a long wait for an over-crowded and late bus.

I’d known since I was 12 that, owing to poor eyesight, I wouldn’t be able to learn to drive a car. As a student and then living and working in Cambridge, this hadn’t bothered me. When I had my first and even my second child, we got by. We walked for miles and miles and managed (just about!) with a double buggy on the buses. But when the third came along, it was the breaking point. So, following the conversation above, we looked into cargo bikes. We’d previously had a bike trailer and a tricycle for carrying the older two boys, but I’d not fallen in love with either and we rarely used them. The trailer felt heavy and cumbersome and I couldn’t chat to the boys as we cycled, plus it lacked storage space. The tricycle had seats on the back for them, but it wasn’t weather-proof and there was even less storage space. And neither let the them nap when needed in any degree of comfort.

So, in February 2017, we hired a cargo bike for the weekend and off we went! We all loved it immediately. We’d gone for the Bakfiets long model and it simply ticked all the boxes. It’s a dream to cycle (it took me five minutes to get used to it, being a confident cyclist on a ‘normal’ bike) and there is plenty of storage space (the long model does what it says on the tin – it’s long – plus there are two large panniers on the back).It’s weatherproof (we tried the extra-high rain cover which means even my tall 7-year-old can comfortably sit underneath it and be securely zipped in and covered from the elements). The seating is versatile (one fixed bench in the front can take two children, there is another removable bench in the long version which can take another child and we also have a seat on the back, so the children can switch places – and you can break up arguments if needed!). Plus it can fit a baby/toddler seat so my youngest could sleep in comfort.

It’s been a vehicle of necessity, fun, and even an ambulance and has risen to every challenge

The only thing missing was – electric assist! I see plenty of people cycling in Cambridge with the manual version and multiple children. Well, they must be super fit! I convinced my husband that, with three not-entirely-small-children (all 10.5lb at birth and they haven’t stopped growing much since!), I needed some help. This was, after all, effectively going to be my car. So we ordered a model with all the bells and whistles and, to be fair, a price tag to match – but we consider it a cheap car rather than an expensive bike. Plus the re-sale values are good. And we haven’t looked back since.

Since March 2017, we’ve covered close to 4,500 miles. We’ve been to St Ives and back. We’ve been just about everywhere there is to go in Cambridge. We’ve discovered only two cut-throughs with barriers we can’t get through (my bike-wriggling-around-corner-skills have become well-tuned!). We’ve cycled in sun, rain, snow, ice and everything in between. The school run has been revolutionised. No more walking home with tired and tearful children who need a rest – pile them on the bike and we’re home in three minutes with no (or at least less!) moaning; and it’s given us a freedom that we didn’t have before. This summer we are eagerly planning trips to Anglesey Abbey, Cherry Hinton Hall, Wicken Fen Nature Reserve and more. None of this would previously have been easy with three children and a dodgy bus service.

It’s been a vehicle of necessity (the school run), fun (family days out) and even an ambulance (transporting a child with a broken arm to A&E) and has risen to every challenge.

And if my eldest ever mentions the double buggy and sling combo, I just laugh and pile them all on the bike!