This project was introduced in the last newsletter and it continues to be run from the Camcycle office on Wednesday afternoons. The main outcomes since last time are that we: 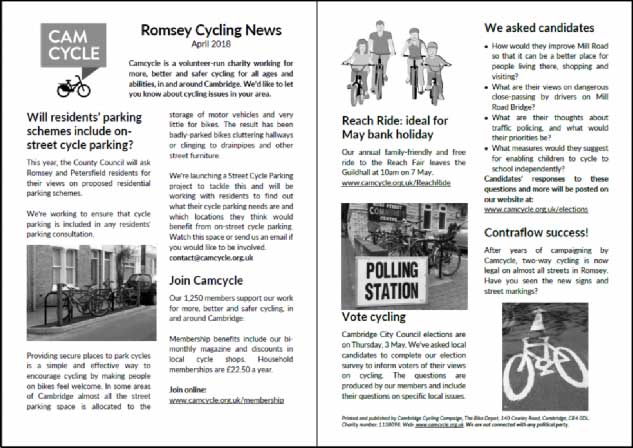 We found an 8am window on a Monday to meet with councillors from Romsey, Petersfield and Coleridge wards. We introduced to them the Street Cycle Parking project, with its three-year plan. We learned about the forthcoming consultations on residents’ car parking schemes. Next, we will approach our contacts in the councils with the aim of getting Street Cycle Parking included in those consultations.

Election dates have been important landmarks in the three-year plan since the start of the project. When combined with our strategy of consulting residents about street cycle parking, the idea of an election-style leaflet for the ward was born. We gave ourselves some simple constraints: two sides of A4, black and white, a 14-point font size, and a few relevant photos. This format helped us focus quickly on the issues we thought would be most likely to catch voters’ attention.

The early draft received strong backing from the trustees and by the following Wednesday we had authorisation to print 5,000 copies. The published version had stories about the project, the Campaign’s election survey, the Reach Ride and the breaking news about contraflow cycling in the ward.

Printing by a local firm took two days and we picked them up on Friday. The Space for Cycling ride took place on the Saturday and after that six volunteers came to Thoday Street to bundle leaflets and take them away for distribution. By Sunday evening the whole ward had been covered -which took a total of 24 person-hours.

In the week following the distribution, four or five new members joined Camcycle as a direct result of the leafleting. We also received three emails sceptical about the idea of on-street cycle parking and critical of the two-way cycling changes. The feedback, though critical, tells us where some people are on these issues and responding to the participants has given us the chance to put alternative points of view. The level of nays, just three from a distribution of 3,000, suggests that the vast majority are not opposed to these ideas.

On Cyclescape, members have been saying how they like the Romsey Cycling News and asking to have it in their ward too. Step forward then, volunteers!