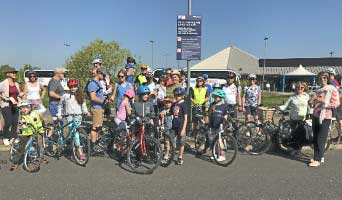 The A10 Corridor Cycling Campaign held its sixth Annual Awareness Ride on Sunday 6 May.

Katrina and I joined them at Trumpington Park & Ride for the start. They had 36 riders, and I rode with them all the way to Phillimore Garden Centre which is 3 miles from Royston. It was a bit slow going as there were many young children riding and I was co-opted as the back-stop rider.

Most of the faces were new to me, and I recognised only a couple of Camcycle members. I did the original ride in 2013, and again in 2015, and I’m pleased to report that the route is much improved, but with quite a few minor irritations to upset regular users.

I hear they are still waiting for the next phase, the funding of the connection to Royston, which requires a bridge over the bypass. There was money for that ready but for some reason the partnership of local authorities was dissolved. However the recent change of political control in South Cambs might help with that.

Possibly, next year Camcycle could do more to encourage its own members to support this worthwhile project. They certainly made us very welcome with fruit donated by Tesco and chocolate brownie cake made by lead campaigner Susan van de Ven.