Do you want more cars on Mill Road, or do you think, like us, that every opportunity should be taken to reduce traffic? Incredibly, councillors look likely to approve more car parking spaces, even while spending millions on measures to deter traffic. 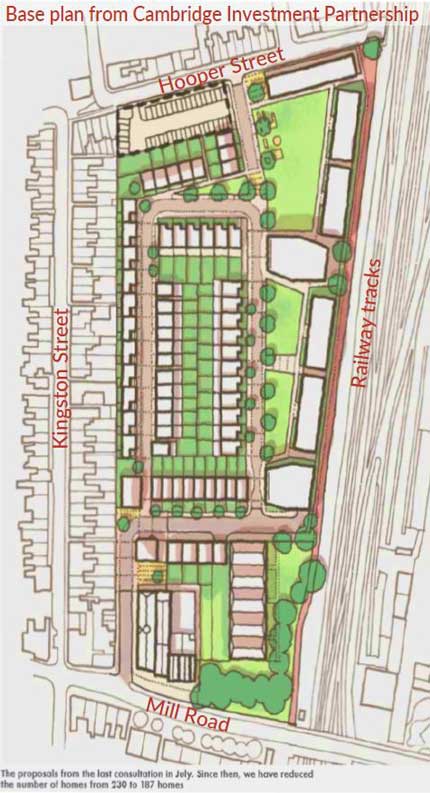 The Mill Road Depot is a site off Mill Road next to the bridge, proposed for a new residential development. It is a joint project between Cambridge City Council and housebuilder Hill. They are planning to build 187 dwellings, an increase from 167 dwellings in the approved planning document. Approximately 150 car parking spaces are proposed in total: 122 for residents and the remainder for visitors. This works out to approximately 0.65 car parking spaces per dwelling. The latest plans for the development can be viewed at their website: www.millroad-development.co.uk

We believe that the level of car parking provided should be no higher than in the surrounding area, given the amount of congestion already present on Mill Road; there is no need to make it worse. For comparison’s sake, we have done a survey and estimated that the surrounding area of Petersfield has an average of 0.5 on-street and off-street car parking spaces per dwelling, significantly lower than the 0.65 ratio proposed for the Depot site.

Why is there a higher-than-normal level of car parking proposed for a site with probably the best access to sustainable transport in all of Cambridge? The main railway station is nearby, there are excellent cycling and walking connections (the site will host part of the next phase of the Chisholm Trail), easy access to frequent buses, numerous employment opportunities very close by, and an abundance of different shopping opportunities on the doorstep. So why does it need lots of car parking?

Why is there a higher-than-normal level of car parking proposed for a site with probably the best access to sustainable transport in all of Cambridge?

We have written to the developer following a meeting with them in August and the latest consultation in November. As usual, we consulted with interested members on this, both on Cyclescape and at a meeting near the site. We covered the various issues relating to the site – the car parking, the (very welcome) Chisholm Trail routing alongside the site, cycle parking and other issues. In summary our views are that:

We note in passing that the proposed ratio of car parking spaces seems to be raising the cost of houses by about £15-20,000, which seems entirely inappropriate in an area of already-high housing costs, and is completely unfair to those residents intending to live without a car on this site. This estimate is based on what we have seen near the station. The development along Great Northern Road includes some basement car parking, and residents who want spaces have to pay £25,000 up-front for a space plus a £600/year service charge. Assuming a 20-40% profit level for the developer, that means the actual cost to build such parking is £15-20,000.

Car parking isn’t free – it increases the cost of the houses and takes up land. When it’s in a basement (as proposed here), it costs money to excavate and maintain. When it’s in a house, it means that (as proposed for the Depot site) half a floor is taken up, so a third floor has been added – again raising costs.

The developers claim the car parking will mainly be used as ‘car storage’, i.e. the cars will only be used occasionally. This is not a satisfactory response because it is terrible social policy to make housing more expensive to store cars that will hardly be used, while if they are used they will cause even more congestion and pollution on Mill Road. Instead of wasting space by storing many rarely used cars, it makes more sense to provide car club spaces and promote the sharing of valuable resources. We have therefore asked the developers to study how car parking causes house prices to increase, so that councillors will be able to make an informed decision on the costs of having so much car parking on the site.

The site is subject to the Mill Road Depot Planning & Development Brief, known as ‘the SPD’. However, the wording of the SPD is incredibly weak. It leaves important areas of public policy like levels of car parking to the commercial whims of the developer:

Based on discussions to date, the aspiration is to provide low car parking provision with an additional visitor parking space of 0.25 per home (i.e. one visitor space for every four homes).

An ‘aspiration’ to do something ‘based on discussions to date’ could frankly mean anything! We think the level of parking shouldn’t just be left to the developer to decide. Car parking is a strategic matter, because it affects the surrounding area in terms of increased congestion and pollution, and builds in transport patterns of residents for decades.

Our plans are very much still work in progress, however, our current draft provides the following car park/cycle provision:

Another claim is that traffic won’t increase, because the current vehicles using the Council Depot site won’t be there any longer. But this is irrelevant – the councils should be trying to reduce traffic, given the current problems on Mill Road and the surrounding area, not maintain it. This development is an important opportunity for traffic reduction.

How much parking is there in the surrounding area?

At first approximation there is one parking space for every two houses. The length of a car is nearly the same width as the width of a terraced house, and on many of the streets there is only room for car parking on one side. Those streets with parking on both sides are balanced out by houses with multiple occupancy, garden houses, stretches of yellow lines and houses along Mill Road.

One of our committee members undertook an informal survey of levels of parking, counting overnight spaces available on street and in residential car parks, shown in the table. Note that this is an overestimate of parking per dwelling as not all dwellings could be counted.

We have asked the developer to justify their numbers and undertake (and publish, for scrutiny) a proper survey of the surrounding neighbourhood. So far they’ve claimed a ratio of 0.65 cars per dwelling based on census data:

The car ownership rates in the area were taken from 2011. The census data was used in combination with housing figures, allowing our traffic consultant to calculate the overall ratio in the neighbourhood.

But this doesn’t seem to add up: based on our survey, we don’t believe there physically could be the space in Petersfield for 0.65 spaces per dwelling.

No. One councillor put forward the view that it is important to provide parking on this site, as otherwise there would be overspill to surrounding areas. We do not agree. The remaining areas of Petersfield and Romsey that do not yet have residents’ parking are likely to do so within a few years: it is untenable to spend tens of millions of pounds on bus lanes on Milton Road, but then allow people to circle around residential areas finding open spaces within 10 minutes’ walk of the city centre. (How would that be joined-up thinking?)

Residents’ parking sorts things out straight away – people moving in will see they wouldn’t be able to park, and so will choose not to own a car. People already do this: if you’re part of a three-car household, you don’t choose to live in Romsey, because it’s obvious you’d have problems trying to park each day.

Firstly, please join in our discussion on Cyclescape, at: camcycle.cyclescape.org/issues/1367

Please also contact your local councillors, particularly if you live in the Petersfield or Romsey area, to let them know your views. If you believe like us that they should be aiming for a low-car or car-free site, they need to hear this.