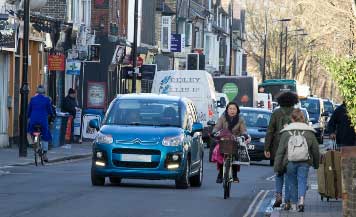 In October Camcycle was disappointed to learn that Cambridgeshire Constabulary would not be taking on ‘Operation Close Pass’. This is a scheme devised by West Midlands Police as a low-cost way of dissuading motorists from driving too closely to people cycling. Undercover officers on cycles radio ahead to a police vehicle when a motorist passes too close, these drivers are then stopped and offered roadside education on safe overtaking; repeat offenders can be prosecuted. The scheme has been highly praised by cycling advocates and has resulted in a 20% reduction in the number of cyclists killed or seriously injured in the targeted region since its adoption in 2016.

Given this success there have been calls for a wider rollout across the country, calls that were rejected by our local police force. Casualty reduction officer Jon Morris said: ‘Cyclists are vulnerable road users and it’s important that we are doing all we can to make the roads safer for everyone but at this time we don’t believe Operation Close Pass in its current format is practical in Cambridge’. Shockingly, he cited motorist convenience as a reason for not taking on this safety initiative, ‘for Cambridge city where roads are narrower and often very congested we would be potentially forcing motorists to drive at the speed of cyclists when there isn’t the recommended space to overtake’. His statement is in clear contradiction of the Highway Code, which states that a motorist should ‘give vulnerable road users at least as much space as you would a car’.

We issued a press release objecting to this decision. ‘Camcycle is beyond disappointed in Cambridgeshire Police. We are angry that they are apparently advising drivers that it is OK to pass closely because maintaining the speed and flow of motor traffic is more important than the safety of vulnerable road users.’ Similar condemnation also came from Sam Jones, Campaign Coordinator at national cycling organisation Cycling UK: ‘Cambridgeshire police’s decision is very disappointing. Not only does it demonstrate a lack of understanding of the Highway Code’s guidance on overtaking people cycling, Rule 163, but it also seems to prioritise the inconvenience of one road user over the safety of another.’

So we are pleased to hear that Cambridgeshire Constabulary have since reversed their decision. We understand that they have now accepted Cycling UK’s offer of a Close Pass mat for education and plan to carry out a Close Pass operation early in 2018. Duncan Dolli-more, Cycling UK’s Head of Advocacy and Campaigns, said: ‘it must be Christmas, as last week Cycling UK heard from Cambridgeshire Police that they were looking into the feasibility of running operations which address close passing of people cycling in the tri-force area, including Bedfordshire and Hertfordshire. They’re still considering the exact nature of their operation, but we’re encouraged that they’ve reached out to us and are taking the matter seriously, as we’re sure cyclists in their area will be as well.’ We hope to have an update soon on the progress of this operation.