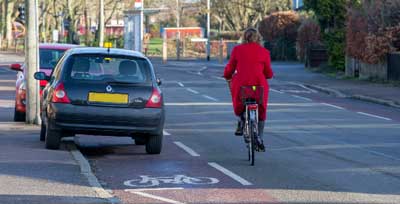 The Green End Road cycle lanes in Chesterton have caused quite a stir, and mainly not in a good way. Since they went in, some local businesses have petitioned for customers to be able to park in the cycle lanes in front of their shops, and the Greater Cambridge Partnership has acceded to their wishes. Now, people trying to cycle along Green End Road are stuck between parked cars and road-raging motorists.

Jon Dye, a local resident and Camcycle member with school-age children, has refrained from allowing his kids to cycle on their own to Chesterton Primary School because of the cars parked in the cycle lane. Instead he brings them to school on his large tricycle. Naturally they have questions about the things they see:

County Councillor Ian Manning (Chesterton, Lib Dem) explains the parking-in-cycle lane situation as one of compromise in a project that didn’t meet his overall expectations. His preferred solution would have involved having a kerb-segregated cycle lane and parking alongside that. But timescales did not allow officers to fully work out such a scheme, and the loss of car parking in the intermediate term was felt to be too severe for the businesses.

Camcycle also submitted comments in favour of a protected cycleway, with car parking between the carriageway and the cycleway, to the Greater Cambridge Partnership Executive Board meeting in July. Such a scheme could have been integrated with a planning application under review at that time. Sadly, the planning system does not appear to be able to bring these two opportunities together.

These political matters are cold comfort for those just trying to reach work or school. Many of the parents and children have tried to stay safe by cycling on the pavements, if those are not blocked by anti-social parking as well. The Chisholm Trail will also bring relief for some riders currently using Green End Road. Locally we have to ask two questions: can anything be done to fix things? And does this demonstrate a case where no scheme is better than a bad scheme?