The county council’s cycling projects team finished most work on the B1102 cycleway/shared-use pathway in December. It runs between the edges of the villages of Stow-cum-Quy and Lode alongside the B1102. The monthly #CamRideHome group added a special extra ride on 31 December to tour the new cycleway and take lunch at The Shed in Lode. We started at the Cutter Ferry bridge on a beautiful winter’s day and rode out along National Cycle Route 51 until we reached Stow-cum-Quy. But instead of crossing the B1102 we turned left and rode through the southern part of the village on the main road. This 600 metre section is unfortunately very busy with motor traffic despite the 30mph speed limit and traffic-calming measures. As soon as we could, we veered right onto the old Main Street, a considerably calmer and more pleasant route through the village centre. Main Street ends at Albert Road, with the White Swan pub on the corner. Across the way is a newer road called Quy Court that serves a small business centre. We used it to reach the southern end of the new cycleway, which is connected to the car park entrance.

The new cycleway runs behind the hedges and along field edges, shielding us from the noise and grit of the highway for the most part. Everyone enjoyed the comfort of the protected pathway and the views of the countryside. Sadly there is one segment that must rejoin the highway corridor for a while, having only a 0.5m grass verge for protection. But it doesn’t spoil the experience overall and we were soon back to the quieter side.

Anglesey Abbey is across from the northern end of the new cycleway, and the crossing of the B1102 here caused Camcycle great concern a year ago when the design was put forward for consultation. In order to reach the National Trust site, or to continue towards Lode, you must cross the fast and busy B1102 with only a small refuge in the middle for safety. The depth of the refuge is just slightly less than two metres, making it virtually impossible for a person on a bicycle to wait in it safely, much less a family with a trailer or a cargo cycle. The presence of the refuge may tempt some people into trying to cross in two stages, but I would advise waiting until both sides of the road are clear, even if that takes much longer. The approach paths to the crossing on either side are also very narrow and could be difficult to negotiate with a longer or larger cycle.

On our way back from Lode we decided to avoid the tricky on-road segment through Stow-cum-Quy by taking a slightly longer route. Riding back the way we came, at the corner with the White Swan pub we took a left onto Albert Road and went over a small hill to reach the existing Route 51 pathway along the A1303, next to the Missing Sock pub. This diversion added 0.7 miles to our journey but ensured that we could stay on either protected paths or quiet country roads. Overall, compared to the old route through Bottisham, the new link saved us 1.3 miles going out using the tricky route and 0.6 miles coming back using the quiet route.

Either of these routes will be useful for travel between Cambridge and Lode or Anglesey Abbey. As of 1 January, I’ve already used it five times.

Mike Davies, who leads on cycling projects for Cambridgeshire County Council, provides an update about the scheme, which has not yet been officially completed:

Solar studs, way-finding and shared-use signs will be coming. Money was raised by the Lode Parish Council, with help from Marshalls, for the initial feasibility study by Sustrans and to start talks with landowners (including the National Trust). The scheme itself was funded by £450,000 from the Cycle City Ambition grant. Further enhancements to the overall route could come as part of the Swaffhams Greenway project, such as work in Quy itself. The project has been possible thanks to support by both Quy and Lode parish councils, County Councillors Matthew Shuter and John Williams, the landowners, and Marshalls.

The annual Reach Ride could also potentially make use of the quiet route. That will require further consideration, especially about the risks of directing hundreds of riders per hour via the problematic crossing at the northern end. Overall, with the path now in place, we hope that it will form the basis of further extensions and improvements for cycling in the area. 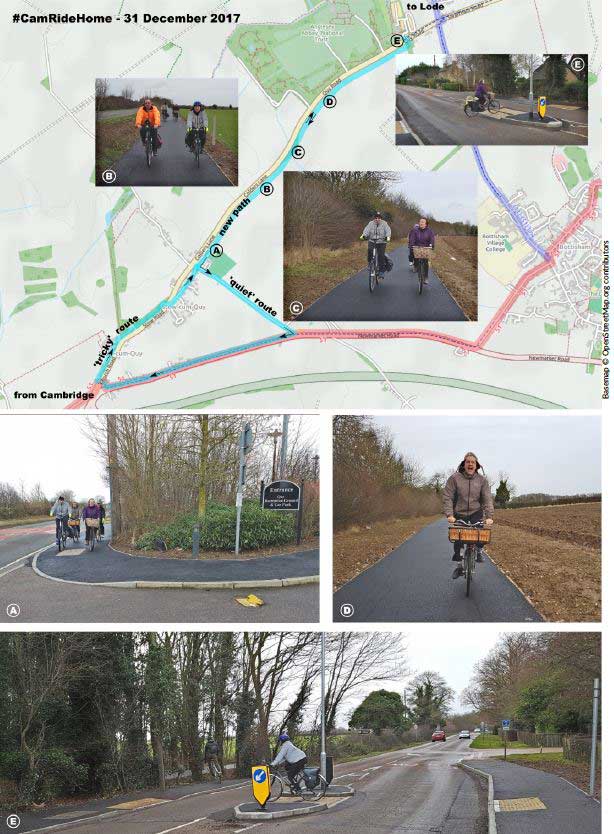