In October I visited Berlin for eight days with my partner. We spent a couple of those days cycling around the city, and more time looking at how it was laid out for cycling (cycle campaigners find it hard to switch off).

Overall, it was one of my better experiences of cycling in a large city, but Berlin was a poor model in terms of how to design a cycle network.

Cycling made up 13% of total traffic in Berlin in 2010, which is about average for Germany, but higher than much of Europe.

It was clear as soon as we arrived that cycling is a part of the transport mix. While not as big a proportion of travel as in the central areas of some Dutch cities, there were always people cycling wherever we went. There was a mix of men and women, young and old, and usually without helmets, and in ordinary clothes. I saw people cycling with children in bakfietsen, though I saw very few children cycling independently.

The city has velotaxis if you wish to be ferried around by bike. Bikes can also be taken on much of the public transport, if a bike ticket is purchased.

Berlin is not somewhere I would go to see good cycle infrastructure. There were a lot of bike lanes, and all large roads I saw had something, but that something was often only a narrow painted bike lane. I found that when in these lanes, close-passing by drivers (or even other people cycling) was common. If the street had parking for cars, there was not always a buffer between parking and cycle lane, which risks car doors being opened into people cycling.

The other main form of cycle lane was a lane embedded in the pavement, usually either red or grey. There were no cycle symbols on these, and I sometimes found it hard to determine whether I was allowed to cycle on the pavement, especially as it was common for pavements to have more than one material anyway. Other times I was sure pavement cycling was not allowed, but I saw other people doing it anyway, which is usually a sign that the cycling infrastructure is inadequate. The narrowness of the cycle lanes, whether on-or off-road, meant there was very little sociable cycling.

Although cycle lanes did have priority across sideroads and driveways, the fact that these were painted lanes without any set-back from the road made me feel vulnerable. If someone decides to turn across you, there is no time to see them coming. In practice I found drivers did wait and turn correctly, but I have seen videos of cycling in Berlin where this was not the case. Cyclist priority was not reinforced by design, which makes it more likely that it will be misunderstood or ignored. One good feature was that the cycle symbols faced drivers at driveway entries and exits, which did help highlight the presence of a cycle lane.

At some large, busy junctions there were cycle-specific traffic lights, which avoided turning conflicts between vehicles and people cycling. In these cases, the cycle route across a junction was normally obvious, though sometimes the timing of the signals was less convenient than those for motor vehicle. However at other junctions, even on main roads, there was no assistance for turning, especially turning left (equivalent to our right). Advance stop boxes did not go all the way across the junction as ours do, so it was difficult to position oneself for left-hand turns. There also seemed to be no culture of cycling in primary position, which would also help position for turns.

Overall, drivers in Berlin seemed aware of people cycling, and while the conflicts and ambiguity at junctions made me nervous, we were able to negotiate our way through them.

Why dockless cycle hire? Cycle hire for tourists is often relatively expensive, and it means finding a hire shop, which may not be anywhere near your accommodation, filling out hire forms, and returning the bike during office opening hours. You then have to travel back without the bike. With street hire there’s a good chance of finding a bike close to your accommodation, and hiring it within minutes. Rather than being on a time limit to return for a day’s hire, you can return it into the evening, near your final destination.

In common with other schemes, locking and unlocking were controlled by Bluetooth. There was no other option: some schemes have a manual code alternative. The main lock was a wheel lock, but there was a chain attachment to secure the bike to stands. The Cambridge dockless bikes are intended to stand alone, not using up cycle parking spaces; these ones were intended to lock to existing infrastructure, but were more secure for that. 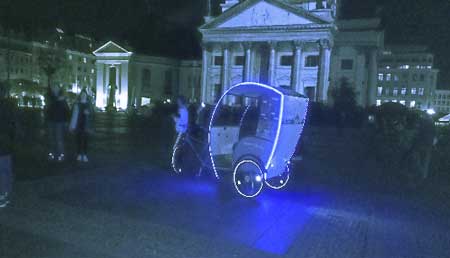 Whereas in Cambridge dockless cycle hire is for a single trip, with Donkey Republic you hire for between 30 minutes and a day, and no-one else can hire your bike during this period. This has the advantage that when you park your bike, you know it will be there when you get back for the next journey. The downside is that there is a surcharge if you eventually return to a different location. This means the hire company can maintain the level of bikes in the most popular locations, or you help pay for the staff to move them back. This also makes single trips disproportionately expensive.

The bikes themselves were well-made, with front and rear sprung pannier racks (we didn’t have panniers with us, but the springs could hold other bags in place), 5 gears and a kickstand. The weakest feature was the lights: although they were dynamo-powered, they were not very bright and had no standing light function, so only flashed while the bike was in motion.

Despite some of the problems with the infrastructure, this is the most comfortable I have felt cycling in a major city outside of the Netherlands. As people who are already used to cycling regularly, seeing Berlin by bike was enjoyable, and helped us see more of the city.