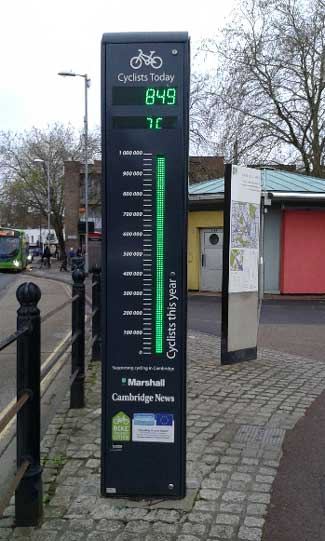 The cycle barometer in Parker’s Piece reached the mark of one million cyclists on about 7 December. We estimate that this is a week earlier than for 2016. This indicates a clear increase in the number of cycle trips taken in Cambridge over the year. The cycle barometer is near the bend where the cycle path alongside Gonville Place joins Regent Terrace and records all cyclists going past on the cycle path in either direction. It was installed in 2014, just in time for the stage of the Tour de France that started there on 4 July. Placed within view of the often congested inner ring-road, it is a great example of the potential for cycling to unclog the city. Here’s to hitting a million trips even earlier in 2018! Is it time to increase the maximum count, so that it can show the total for a full calendar year?