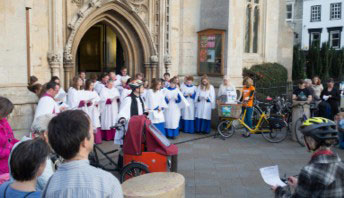 To coincide with the beginning of the Michaelmas Term at Cambridge University, Rev. Devin McLachlan, associate vicar of Great St Mary’s Church, organised the first ‘Blessing of Bicycles’.

Rev. McLachlan, who is originally from Chicago, said the Blessing of Bicycles was partly inspired by the ‘blessing of the backpack’, a tradition in America to mark the start of the school year, and that bicycle blessing services had become popular in the USA.

He highlighted the many environmental benefits to go with the spiritual boons of cycling and explained that ‘Cambridge is a unique city in terms of the sheer number of bike users and it’s a chance to bring people together and offer prayer for people who might not normally come to church.’ 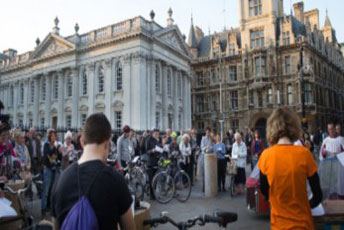 The blessing was held outside the north door of the church so that people could come along with their bicycles. About 50 people gathered, many with bicycles, and there was lots of (bicycle) bell ringing. The all-girl choir sang a specially written anthem and ‘Daisy Bell’, followed by the cyclist litany read out by Rev. McLachlan which asked for deliverance from ‘punctures, puddles and pedestrians on phones’, accompanied by more bell ringing. The bicycles were then blessed and the short service ended with invitations for anyone to lock up their cycles and join the congregation for choral evensong.

The spectacle of an outdoor service and a vicar wearing a cycling helmet proved very intriguing for tourists, and my bright orange Camcycle t-shirt and our branded stall bike must have featured in many of their photographs!