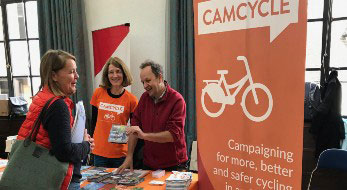 Once again Camcycle was invited to attend this excellent event organised by the Cambridge Hub and the city council and sponsored by ARM. There were representatives from 90 local voluntary and charity organisations and over 800 people attended.

Lots of people were interested in finding out about our organisation. I had help from Donna, John, Simon and Matt in fielding the many queries and listening to people’s stories about their cycling experiences.

We had copies of the newsletter, our comprehensive Freshers’ packs, the #AbsoluteBollards leaflet and some volunteer profiles. Particularly popular was our publication Making Space for Cycling which was thumbed through many times. Several Dutch people were interested in this as they immediately identified with the picture on the front (a Dutch cycle lane).

There were several people keen to volunteer, with students and soon-to-be retirees asking how they could help, which was great as we always need more volunteers to come forward to support us in various ways.

The event was also useful for networking with similar organisations and I was able to make connections with them so that we can work in partnership together and support each other in the future.