South Africans are a hardy lot and love their cycling. Perhaps not in quite the same way as Camcycle members, but in a more sporting way. So if you speak to them about cycling their only real reference is competitive cycling: thrashing around on the road in lycra or in the rough on mountain bikes. Getting fit.

But not as commuters: the mountainous landscape, narrow roads and lack of cycling infrastructure do not lead to an easy ride.

And it can be hot, and often very windy, such that the much vaunted Cape Town Cycle Tour had to be cancelled in March this year as cyclists were being blown off their bikes and down the road.

There are some hardy commuters, but not many, for cycle commuters also face the same familiar problems.

Cars park everywhere on the pavements, the cycle lanes are very narrow and risks of ‘dooring’ are high, and just where the lanes are most needed they can suddenly disappear. Or the lanes are just ignored although, unlike Cambridge, not by parked cars but by pedestrians and street vendors.

However, there appears to be a growing awareness that things need to change. Open Streets Cape Town (www.openstreets.org.za) is an organisation started in 2012 working to design and promote streets which ’embed and generate respect for people, regardless of who they are or how they move’. Their commitment to making Cape Town’s streets ‘much more than they are’ informs a general policy aiming to free the streets of motor vehicles. Their work includes guides on how to hold Car Free Days and to encourage walking, with the promotion of commuting Bike Trains and cycling publicity included in the mix.

In the past five years there have been twelve ‘Open Street Days’ in five parts of Cape Town. At these, sections of main roads are closed to motorised vehicles, becoming an open space for pedestrians, cyclists, skateboarders, wheelchair users and other non-motorised transport users to move in safely. These events have attracted between 3,000 and 15,000 participants at each one and in October this year a 5km stretch of road was closed, one of the city’s biggest road closures outside of a major sporting or cultural event. 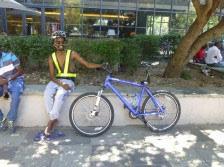 Efforts are also being made to install cycling infrastructure, with some excellent off-road cycle paths along new major road routes to new out-of-city commuter towns and suburbs. Unfortunately they do not provide full commuter routes into the city: where these lanes reach the older and more congested areas, the cycle routes just peter out.

The higher-density townships do not have these facilities, for historical reasons, because of personal and property security concerns, and because the ubiquitous and crowded mini-taxis provide regular and cheap, if uncomfortable, services.

Out of the Cape Town city area the occasional cycle tourists can be seen trekking through the heat.

Intrepid folk such as Jean-Marc and Leigh Strydom who I met in Worcester in the Little Karoo after they had cycled on their Thorn Ravens through the arid winelands of the Little Karoo for a ‘wine tour’ (you can read tales of their cycling adventures at (www.crazyguyonabike.com/directory/?user=j-ms). 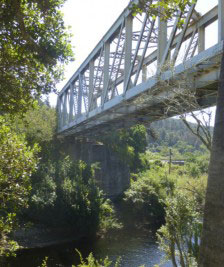 But as for the lonely tourers braving the fast-moving traffic? Not for the faint-hearted like me.

Some cyclists entertain the pipe-dream of cross country cycle paths, such as along the beautiful Garden Route on the disused railway line from Knysna to George (right). With cuttings through wildlife areas and stunning views from a series of bridges, they enthuse that this would make a wonderful linear recreation area and wildlife park.

It is a brave and determined cyclist who would regularly commute any distance in the greater Cape Town area, but things are changing and hopefully gathering pace as residents begin to accept the benefits of reclaiming their cities from the car, and joined-up thinking and infrastructure start making a difference.

And it is much warmer cycling than here in Cambridge.