The layout of such developments can significantly determine the quality of the new settlement and the ways that people will move around it.

To explore this we will use the simple example of a location where a new development is to be placed to the north of an existing settlement, with the strategic road network to the south, and a railway to the north. Given that this is a hypothetical development, let us assume that this development would have 10,000 dwelling units, needing three or four primary schools, and one secondary school. There would also need to be some local amenity areas that would provide food shops, hairdressers, and other services, with one larger area that would provide space for offices, a supermarket, and local government services. 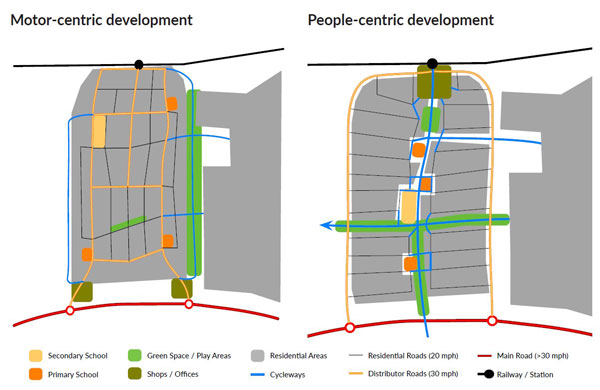 Typically, having two access points to the strategic road network is considered useful. This allows emergency vehicles access to the development in multiple different ways, providing alternative routes in case of a road traffic collision blocking the other access point. It could be possible to have more than two access points, but then the impact of having many junctions on the strategic road network would need to be considered.

The railway has different requirements. Typically, a single railway station, or Busway stop, would be provided. Each time a stop is added to a railway, the time for all other journeys is increased and therefore providing multiple stops is more detrimental than providing a single stop to which everybody has to travel a little bit further.

There are many different ways to determine the best way to lay out the roads, railway station, schools, shops, and offices. And most of the time, such developments will have a lot of documentation that showed that the developers spent days working with local people, and experts, to help design such a layout. And most of the time, they get it wrong. Wrong in that they will have designed a development that will work but it would not be a great place to live.

Let’s consider two possible, and very different, ways to optimise the development. The first is motor-centric and the second is people-centric.

For a motor-centric development everything should be an easy drive away, accessible on the main roads, and the most-used locations on the major routes.

The primary and secondary schools would be placed along the primary roads, allowing parents to drop off their kids as they drive to work, possibly weaving along the primary and secondary roads to get to their children’s schools. Walking or cycling to school will be considered too dangerous by the parents, because of the number of cars on the main roads near the schools, and because the developers thought that a ‘shared space’ outside the schools would solve that problem. Residential streets would be placed in the gaps between the primary and secondary roads, with access in many different directions. Some of these residential streets would become rat-runs as people in motor vehicles try to avoid some of the inevitable congestion, especially at school drop-off or pick-up times.

For the convenience of the motor vehicle, the offices are placed right next to the strategic road network – everybody will drive to them anyway, so it is better to place them at a location where fewer cars have to come through the new development.

The railway station has a couple of convenience stores next to it, but no real activity. The main retail area is in the middle of the development.

For the people-centric development there would still be two primary roads but these would go around the development. These would be wide and fast roads but would be easy to cross on the plentiful new pedestrian and cycle bridges that are provided, linking the new development with the old settlement for those who wish to walk or cycle between the two.

There are no cycleways, or cycle lanes, along these primary roads, as there will be no need.

There would be an additional access equidistant from the two primary roads, going through the middle of the development: this is the principle walking and cycling route. Along this route would be located all the primary and secondary schools. This means that any child, from the point at which they can navigate independently to the school, can cycle completely safely to their school. Driving the children to school will be discouraged by placing the schools at the end of a dead-end, meaning the parents either have to drive a long way out of their way to drop the kids off, or just allow the children to cycle their own way to school.

The residential areas would be designed as simple U-shaped roads. You can drive in at one end, and you will pop out at the other end a few tens of metres further along the primary road. There are a few other roads in the middle of the U-shape, but none worthy of a rat-run, and they are very quiet streets.

The main walking and cycling route and its associated links are the most direct access to the shops, community centres, the railway station, and just about every other daily need for most people. As a result, these routes will be well-used at all times of day by a wide variety of people, thus ensuring that they feel safe and vibrant.

The main office and retail area would be placed next to the main railway station. In front of the station is a large public square, with car parking underneath. This would be the only place where the primary roads connect, and then only via the car park under the station square. This would also provide the main car parking for the office and retail area, meaning that everybody who works in these buildings has to walk through this main activity area. This provides a huge amount of retail opportunity, capitalising on the locals who walk or cycle to the station as well as those working at these offices who take the train to work. Above the station is a large multi-storey cycle parking structure that stretches over the platforms, allowing immediate access to trains for those cycling to the station.

One style of development is built from the point of view of encouraging motor-vehicle traffic, whilst the other is built from the point of view of encouraging people to walk or cycle around. One has social coherence problems as the high volumes of car traffic divide the settlement into multiple tiny segments. The other has high social coherence, as children can play out in the streets, or along the primary walking and cycling route. Most of the develpment’s play areas are also along this route. One style of development encourages longer journeys as children are driven to remote schools, and then you drive yourself to the office and park at the edge of the development, and then to the other side of town to pick up some food on the way back to picking up the kids after school. The other style of development encourages people to walk or cycle with their kids to school, and then through the main retail area to their workplace, picking up food on the way back before picking up the kids and back home. The journeys are centred along a single consistent route that links all the development’s main activity areas.

Unfortunately, what are being built, and being proposed to be built, in and around Cambridge are the motor-centric style of developments. It is much harder to retrofit a good style on a poorly laid-out development, mainly because once the road space has been allocated and schools placed next to those roads it is very difficult to change those. However, it is at least possible to fix a few of the problems, such as closing rat-runs to through traffic.

We believe that it is better to design a development that meets the needs and requirements of all residents, not only those who can drive. This approach will create a cohesive and inclusive community that is stronger and future-proof.