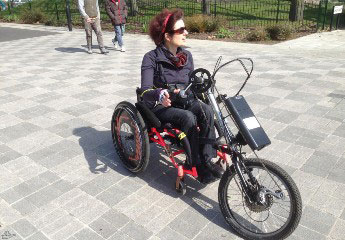 On episode four of the Camcycle podcast I chatted to writer and cycling supporter Sally Hinchcliffe about rural cycling. She lives in Scotland, five miles from her nearest shop, in what she describes as an area of ‘rolling hills’.

Sally cycles a lot even in this environment, but a recent house move to the top of a hill has given even her pause for thought. When every trip ends with a mile uphill, even enthusiastic cyclists can wilt a bit. But, as she told me: ‘A friend who was not much of a cyclist before got an e-bike and she’s been tempting me with it. She had tried cycling with just an ordinary bike but she really struggled with it. And now she’s all over the place with it: she’s thinking of things to do with it, she’s evangelical about it. And that’s the difference.’

What is an e-bike?

Let’s stop for a moment to clarify what I mean by e-bike. e-bikes are really electric-assist: more or less bicycles (or tricycles, or hand-cycles) with batteries to aid cycling. Under UK law they must still be propelled by pedalling, the electric assistance must cut out over 15.5mph, and the motor power must not exceed 250W. If you meet the legal requirements, they are treated under law exactly as unpowered cycles, and can use the same infastructure under the same rules. The fact that they require some pedalling means that they are still active travel, enabling people to enjoy regular exercise as part of getting from A to B.

e-Bikes have helped transform cycling for those people who find cycling physically challenging. In countries such as Germany and The Netherlands where cycling is an ordinary mode of transport, people like to continue cycling as they age, even though their fitness may mean that they can’t pedal as hard or as fast as they used to. e-Bikes help people keep make the same journeys in the same time as they are used to, continuing independence and active lifestyle into greater age.

I know people who are able to cycle without electric assistance, but prefer to use an e-Bike: people who cycle much more than they used to with an unpowered cycle. Whether it’s arriving at the office in a suit without having to shower, or just taking some of the resistance out of longer or hillier journeys, e-Bikes enable people who would like to cycle. One of the most popular existing uses of electric-assist in Cambridge is on bikes to carry children. Cambridge may be flat in general, but as anyone who cycles here knows, there are plenty of bridges over rivers and railway lines, and heaving the weight of one or more children up and over them can be a challenge! By taking the effort out of carrying children on a cycle, electric-assist can help parents avoid the need for a second – or first – car. The difficulty of parking a car in Cambridge means that being able to make short trips and errands with children by bike can be liberating.

Electric-assist is also a huge advantage to cargo bikes. Local cycle delivery service Outspoken uses electric-assist on the largest cycles in their fleet. At Camcycle we’re currently considering replacing our stall bike with an electric one, so that a wider range of our volunteers feel able to carry the table, gazebo and stall materials which we take to events in the area.

With so many uses and advantages, it would be good to see the government support use of e-Bikes. The government has been keen to incentivise the use of electric vehicles as part of plans to improve air quality, but there’s a problem: electric bicycles are specifically excluded from the scheme to reduce the cost of electric vehicles, though mopeds are included. The vehicles with the lowest environmental impact, which also encourage physical activity, are not eligible. When questioned on the policy the response has been that they didn’t believe that electric bikes can replace motor vehicle journeys and therefore meet the policy aim of reducing air pollution.

That’s not the experience of Sally’s friend: looking for opportunities and journeys that she can make with her e-Bike instead, because of how easy and enjoyable it is. Making it just that bit easier to cycle when conditions aren’t ideal: that’s the difference.