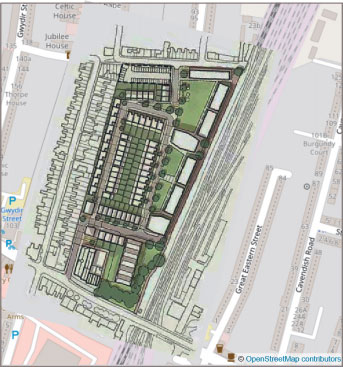 The Mill Road Depot site, off Mill Road next to the railway bridge, has been proposed for a new housing estate. The proposed development is a joint project between Cambridge City Council and housebuilder Hill. Currently the site is owned by the City Council and used for the council’s maintenance and storage services, as well as waste disposal.

Approximately 230 dwellings are proposed by the developer. This is more than the officially-required number, which is 167 according to agreed planning policy.

The developer has a website at: www.millroad­development.co.ukwhich provides a short overview of the proposal. This website fails to state the car parking levels. We had to make multiple attempts to contact the developer to obtain this key information, and the details were only given to us a day before closure of the consultation. We think this key information will mean that many people will be unaware of the scale of car storage being proposed, and we think many would object.

The developer is proposing 210 car parking spaces in total, which we calculate is a car ownership level of 87%. We think this is inappropriately high.

Our aspiration for this site is for a low-car development. Many at the earlier consultation expressed the same view. We think this is one of the sites in the whole of Cambridge with the highest level of sustainable transport accessibility, with good access to walking and cycling (especially with the introduction of the Chisholm Trail), bus routes, and the railway network. Mill Road is congested already, and new residential car journeys should be avoided.

At a time of significant investment being made under the Greater Cambridge Partnership (City Deal) process to attempt to reduce traffic, it would be totally inappropriate in public policy terms for any development to be introducing significant new residential car traffic in the Mill Road area. The development threatens to increase car dependency by introducing car storage which residents will continually be reminded to use once a car is purchased. We think it better not to encourage this from the start.

The developer claims that the parking will be little used. Indeed, in Petersfield, it is common for vehicles to be stored for weeks on end without being used. This is a significant misapplication of public space. The correct policy response for this new development is to encourage car club and vehicle hire, not increase the cost of houses by allocating car storage space.

The developer’s website doesn’t tell people that 210 car storage spaces are proposed. We think many people would have objected to this level of car provision, had the developer told them

The planning policy for this site (the ‘SPD’) requires ‘low car parking provision’. A level of 0.87 of cars per dwelling is proposed (after excluding 10 spaces for visitors). This cannot be described as ‘low’. The Local Plan permits a level of 1, and the surrounding area of Petersfield we estimate to be 0.5 (as parking is often only on one side of the road and the space needed for a car is slightly longer than the width of a house).

The houses there remain under very high demand. This seems a very clear indication that houses with little or no car parking will sell perfectly easily in central Cambridge.

We will object at all future stages of work on this development to any proposal which goes above this base level of 0.5 cars per dwelling, though we think an even lower level should be achievable.

We know from other developments in Cambridge that cycle parking will be in high demand. We expect almost every resident on the development to want to have a bike.

Some of these would be on-street, and others would be in the basement car storage area. We’re not sure of the split yet, but we got a general impression this would be about half and half.

Our general policy on siting cycle parking is that it should be as convenient as possible so that it becomes the natural choice for most journeys. This would normally mean siting near the entrance, at ground floor level. We reluctantly accept that some basement cycle parking is going to be needed, as otherwise the amount of space required on the street would probably lead to too high a loss of open space.

For the basement parking, we have received assurances that there will be a cycle ramp not shared with vehicles. This will ensure that the parking can be ridden to, making it much more convenient than steps (to which we would object). However, a ramp will be needed at each end – it is likely that residents on the Ainsworth Street side entering from that end would leave their bikes on the street rather than go all the way through the development then double back.

Double-stacking or other high-density racks would be completely unacceptable in a development such as this. Given the large land area proposed for car parking, use of such racks, which are not accessible to a significant number of people and can be awkward to use, means that car parking would be being provided at the expense of cycle parking. We strongly encourage the use of standard Sheffield stands or ‘A-frame’ racks, or the new type of rack outside Cambridge Guildhall which adds a wheel stabiliser to the standard Sheffield stand design.

Our aspiration for this site is for a low-car development. We think this is one of the sites in the whole of Cambridge with the highest level of sustainable transport accessibility

We have made it clear to the developer that we would object to any use of double-stacking racks, given the amount of space being given to car storage.

The Chisholm Trail is our long-held aspiration for a linear cycling and walking route running north/south through the city. Various sections have now been built or have been recently approved. The proposed development contains part of the Chisholm Trail, running between the flats and the railway.

The Chisholm Trail will enhance the attractiveness of the development, providing its future residents with access to an attractive Greenway and giving easily-accessible links to key areas of employment. It will further reduce any need for provision of car storage.

We welcome the proposed siting, alongside the edge of the development, next to the railway. This is in our view the optimal location.

The width of the path that forms the Chisholm Trail here is estimated to be 6m for a pedestrian/cycle route and landscaping and will run the length of the development. This would be made up of: 3m width for cycling, segregated from 2m width for walking, and a 1m buffer strip.

It will be important to ensure the Chisholm Trail is fully permeable to the development. An entrance point beside every building should be aimed for. Good visibility splays will be needed at every entry point. That means doors should never open directly onto the cycleway, and there should be unobstructed sight-lines from both sides of people entering the cycleway.

We have recommended that the cycle side needs to be closest to the railway, so that pedestrians don’t have to cross the bike track.

The general street layout is good. Motor vehicles will only be able to enter from the Mill Road end. There has rightly been much local opposition to any suggestion that they would be able to drive through the local streets of Petersfield from the Newmarket Road side. Part of the attractiveness of the Petersfield area is that through-traffic is prevented by two small street closures to through traffic, and we are pleased therefore that these will not be undermined by the new development.

Cycle and walking access, however, will be permeable – provided at both sides. This is good news.

The developer is continuing to iterate their proposals, working with the city council. We plan to pressure the city council to insist on much lower car storage levels. Updated plans will no doubt emerge later in the coming year.

Please contact the councillors for Petersfield and Romsey, the two areas of Mill Road that will be affected by new traffic, to give them your views.