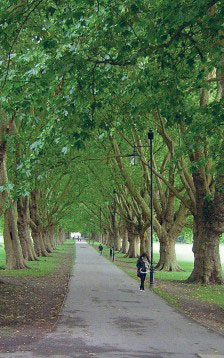 I was cycling along the other day lamenting the fact that it was terribly windy. And it wasn’t a nice wind. A nice wind is one where you cycle fast without any wind at all, because the wind is going as fast as you are and in the same direction. No, I was cycling into a head wind.

Then it happened. The wind calmed. I sped up. I changed into a higher gear, and went faster. And then it stopped. The wind strengthened. I slowed down. I changed back into a lower gear. I bent over my handlebars trying to reduce my frontal area. Nope. It was definitely windy.

This happened a few times on my ride. Sometimes it would be super windy, and at others it would be relatively calm. Not calm enough to completely ignore the hairstyle or wonder if I had packed a comb in with my other stuff, but calm enough to not worry about being late.

There is an obvious solution to this. We need more trees. We need more trees lining the side of the cycleways out in the countryside where there are no houses. This should be pretty simple. Every few metres along a cycleway, on both sides, we should plant a nice tree. I’m not an expert on trees, so I’m not sure on what the exact spacing would be, but they need to be sufficiently far back from the side of the cycleway that when they grow bigger their roots will not deform the surface and so that the lower branches don’t spread into the cycleway. 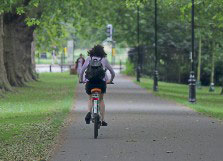 Of course, this would have other benefits. The rain would be less as the trees would capture most of the rain. The drainage of the cycleway would be improved as the trees would drink up most of the rainwater after it rains. The winters would be sheltered from the wind, and the summers would be sheltered from the sun. All those trees would also help with reducing air pollution, reducing motor traffic noise and creating a nice barrier between cars and people cycling and walking.

I can only think of one downside to this whole ‘let’s plant trees along the side of the cycleway’ thing, regular maintenance. There would probably be less pruning of aggressively growing undergrowth as those plants would get less sun, but there would almost certainly be more leaves falling. However, this requires a single pass with a big leaf blower/gatherer machine a few times a year. That same machine could also do the gritting in the winter, and allow people to do other repair work, such as cutting back the edges of paths, at other times.

Perhaps all these Greenways, that we are looking forward to, should really be greened by planting lots of green trees along the way?