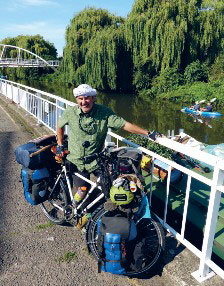 Álvaro Neil, known as the biciclown, is a nomad, clown, author, inspirer, documentalist and, before being reincarnated in those skins, he was a lawyer in Madrid. Since 2001 he has cycled an amazing 200,000 miles, touring the world and giving free clown shows to communities in need. He is currently cycling through the UK and when he visited Cambridge in August Tracey Dornan and I hosted him for an evening (via warmshowers.com).

Biciclown has published several books about his travels, including Miles of Smiles Around the World, as well as documentaries including At the Speed of the Butterflies and The Smile of the Nomad. He even has a Spanish passenger plane named in his honour.

Cycling alone, he carries all his belongings, camping gear, equipment and clown show paraphernalia on his bike – that’s no mean feat when you are cycling the world’s great mountain ranges. Not surprisingly he is now on his fourth bike!

Tracey and I learned about Neil when we were cycling around the world in 2009, so it was a real pleasure for us to host him and hear some of his tales – he is an inspirational character. We sent him on his way with an English breakfast, which I think was a heavier start than he is used to!