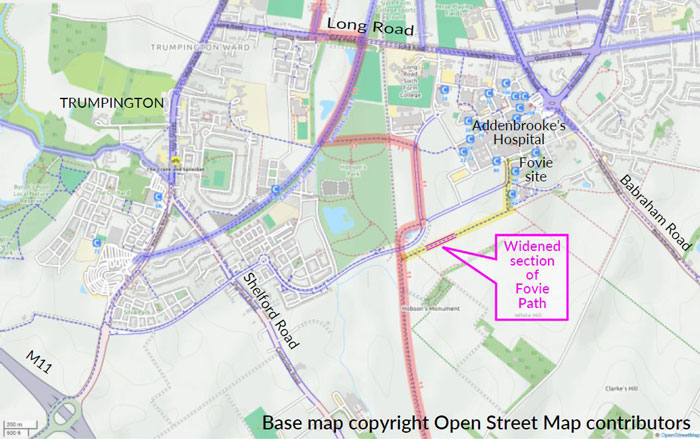 Users of the DNA path near Addenbrooke’s, especially the Forvie Path section that branches off towards the Nine Wells development and Forvie Centre, will have noticed that the vegetation has been slowly encroaching in the 12 years since it was built and the path is significantly narrower than it used to be, with the white lines and LED lights mostly hidden. However, recently the lines and lights have reappeared, for a section of it anyway. 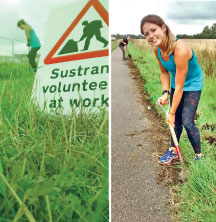 ARM (the large local employer, (for whom I ‘sort-of’ work) encourages all employees to do at least one day of volunteering every year. A group path-clearing session was suggested to me: doing it on your own would be very dull, but with more people it would be (a) jollier and (b) much more effective. Dominic Minett, who had already been doing cycle path maintenance as part of the ‘DNA path group’, thought this was an excellent idea, so I proposed it to ARM’s volunteering co-ordinator.

Advertising this opportunity to make oneself useful got us four volunteers from ARM: me, Jonathan, Charlotte and Pranay. And I roped in a handy neighbour, John, who helpfully owns spades and edging tools, plus having recently retired was available for three hours on a Tuesday afternoon. Maria Desborough, Sustrans ‘Volunteer Coordinator East Midlands and East of England’ came to make us all kosher with risk assessments, a veneer of authority and even a natty sign. And Tess joined us for the last hour or so after work.

I brought two spades, three shovels and a yard brush, which meant that everyone had a tool to operate, and we set to work. Some digging revealed that the path should be 2m wide but had shrunk to 1.5-1.6m. All the white lines and most of the solar studs had disappeared under vegetation. Chopping off the sod was really quite hard work, and because the path has no kerbed edge it was a little tricky to know where to stop, but we all worked hard and cleared 194m of path to its full width in 18 person-hours. So yes, that’s 10m (20m both sides) per hour of work per person, and we weren’t slacking. As Charlotte said: ‘It was great spending the afternoon out in the fresh air and being thanked for our efforts by almost every passing cyclist – though my back certainly knew about it the next day.’ After 4.15pm the pedestrian and cycle traffic increased significantly, and it was clear that doing this at a quiet time is best, so maybe 1pm-4pm is better than 2pm-5pm. We were still keen at 5pm and Maria had to encourage us to stop, pointing out that three hours manual labour for effete office workers was probably enough for one day. She did have a point, as some bits ached afterwards.

So if you’ve noticed that a section of the path is wider now, and has lights and lines again, you know why. There is still a lot of path to do: it’ll take at least two more sessions like that to finish it off.

There is no shortage of cycle paths to maintain in Cambridge, with plenty of overgrown hedges and verges, so there is huge potential for more of this. I would civic worthiness is not to be underestimated. For instance, it took less than a minute to clear the big puddle at the Hills Road floating bus stop outside Homerton College by shovelling off the leaves and soil one Sunday morning.

There is an interesting question as to how best to go about furthering this sort of activity. The DNA path has a Facebook group, to find interested people, but that’s a rarity.

Doing it as employees’ official volunteering time is clearly effective, but it’s quite slow. This first session took four months to set up from initial email (ARM was keen to check the timing of vegetation cutting with the Wildlife Trust, and to have official Sustrans oversight) although future ones should be much slicker now the contacts are in place. Just going and doing something off your own bat can be done in days, but you’ll have to do it in your own time.

Publishing some advice on good practice so that people know what they are doing and feel sufficiently empowered to get out there and improve their surroundings would be a good start. Something along the lines of the ‘GoodGym’ website, but for cyclists, is a model that could work.

If you have workplace volunteering then suggest clearing your favourite bit of overgrown path, and see how many of your co-workers want to help. And, if anyone is inspired by this piece to come and help clear more of the Forvie Path, then please mail me: wookey@wookware.org. We’ll probably do a weekend session next time so more can attend.