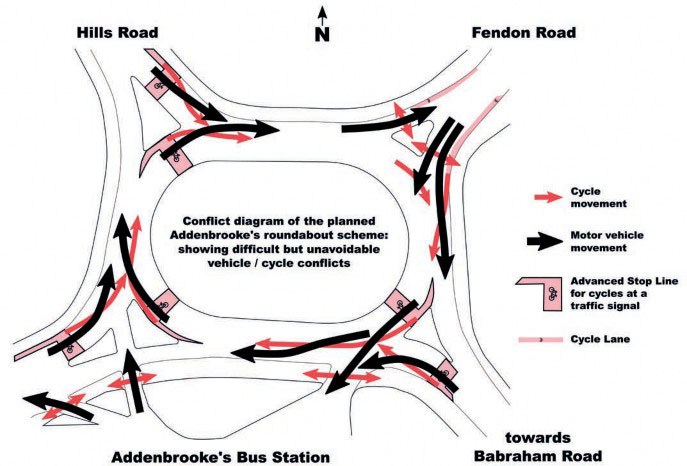 This past month we learned that a plan to renovate the big signalised roundabout in front of Addenbrooke’s had suddenly awoken from its dormant state and is scheduled to be built starting in September. The last time this design went to consultation was two years ago, when it was roundly rubbished for its lack of safety or provision for people cycling or walking. Now we have learned that the proposed unsafe design from two years ago is on the fast track to begin construction within three months, and no further consultation is expected.

The existing roundabout is no joy, with at least 16 incidents recorded between 2005 and 2014, and many people simply try to avoid it. But the new design carries forward the same flaws. The diagram above shows the problems: every time a black line and a red line cross, you are seeing two legal movements that are permitted to occur at the same time but cross paths in a way that is difficult to navigate safely even for highly skilled riders.

There are three categories of conflict shown in the diagram:

The proposed changes would add some formal crossings and presumably turn the signals on full-time. This is probably a very slight improvement over the existing conditions, but it does not fix any of the primary safety problems. It’s a badly missed opportunity, and we hope that it does not preclude a better design being built in the near future. There are major works planned for Addenbrooke’s, including the potential of a relocated bus station as well as a new railway station. With that kind of flexibility, there would be space for a properly designed junction, fixing the existing safety problems for people walking and cycling, while providing necessary priority to ambulances and buses.