The Greater Cambridge Partnership (previously called City Deal) has recently announced the first two routes for Greenways to be studied for practicable options. Some half a million pounds are to be made available for investigations of six of the routes over the next year. Those chosen are to Waterbeach and Fulbourn and by the time you read this, the first meetings will have taken place.

It is the fringes of Cambridge where the best benefits can be obtained and in this short piece, I’ll just concentrate on a couple of locations, where on-going development should be used to support funding of such schemes.

The Tins bridge between the ring road and Cherry Hinton has always been an obstruction to an otherwise upgraded section.

A member wrote to (then) Railtrack to complain about the condition of the bridge in 2002. See: www.camcycle.org.uk/newsletters/42/article7.html

The bridge is still an obstruction and it is still ‘probably’ a criminal offence to cycle over it, and it is still a difficult bit of the route with the rest between Perne Road and Cherry Hinton now upgraded.

The development of the remaining part of the former cement works site, partly for housing, should enable partial funding here, as might the proposed ‘Cherry Hinton North’ development. 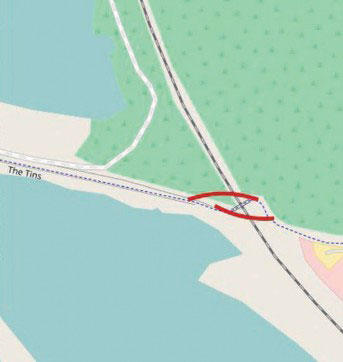 So what are the options here? Clearly no bodge and hardly a need for an architectural gem, but a new bridge with 1 in 20 approaches and a width of 5m+ is essential. Any replacement bridge would almost certainly be required to meet Network Rail standards for a twin-track electrified line (greater clearance and full enclosure over tracks). At least access should not be difficult for construction activities. I asked a couple of contacts about such structures, and was surprised to be told it could be cheaper to go for a longer span with abutments outside railway land! This is because of the difficulties and expense when working close to a live railway. Build the new abutments outside the rail boundary just away from the existing line of current footbridge and then ship in an off-the-peg span during a scheduled Sunday closure of the line. I’m even told that the county already owns some land on the eastern side.

I’m not talking here about out in the sticks in Milton and beyond, but just the huge opportunities available at little cost within ‘Cambridge Northern Fringe (East)’ where major development will occur within a few years and opportunities for improving both cycling and walking could easily be lost.

The old Network Rail road, now opened for cycling and walking, is a big gain compared to using the parallel Cowley Road. Despite this, a couple of simple bridges, 5m wide and 7m long, over the ‘First Public Drain’ would vastly improve access and enable those on foot or bike to avoid a mad junction onto Milton Road.

Obviously, one such bridge would need need to be positioned to give better access to the ‘Bike Depot’ and that branch of Cowley Road giving access to Cambridge Commercial Park.

The second bridge, if located near the driving test centre and opposite the old P&R bus stop, could link to a route to the rear of Orwell Furlong (city council land?). That avoids those mad junctions for routes to and from the Jane Coston Bridge over the A14. Should that old bus turning point be used as a big splitter island in Cowley Road, a two-stage cycle zebra would afford a safe crossing without the need for a Toucan.

That half-mile car park (the other arm of Cowley Road) clearly needs treatment. The shared-use footway with the difficult crossing of several entrances needs to be a pleasant footway for those on foot, as with the removal of parked cars there would be ample space for wide cycle lanes on both sides. Once the parked cars are removed, traffic levels (in this 20mph area?) are low enough that hard segregation would be an unnecessary expense.

Now we have Cambridge North station the best way to remove the dominance of the private motor vehicle is to make cycling and walking more pleasant.

We now have a link for those on foot or bike into the Cambridge Business Park from Cowley Road but it still lacks a similar link to Nuffield Road. I explored this area many years ago. Then I talked to an employee of one of the businesses. She had just walked from their office to the chemist, a distance of well over a kilometre (although a couple of hundred metres can be saved using the short cut through the Trinity Hall Farm Industrial Estate). The direct distance from many of the offices to these, the nearest shops, is a mere 400 metres. Such a route has been included in the Cambridge Local Plan since 2005.

This route crosses the disused railway line which is the proposed route of the Busway and therefore would need a crossing facility for cyclists crossing the Busway.

At that time the old railway was technically ‘operational’. No such obstruction now exists and the precedent of a (perhaps) time-limited access to Cowley Road exists.

Such a route would enable many more to avoid the terrible Green End Road corner with Milton Road.

These are easy quick wins, but, beyond the scope of Greenways, an extension of Cowley Road over the railway to connect to Fen Road must be funded by the major developments here. Such a link would permit the closure of the Fen Road level crossing, and should we add an ‘Eastern entrance’ to the station to our wish list?

Yet another bridge, at the other end of Cowley Road, could use the last bit of the old Network Rail road to rise up for a crossing of Milton Road to the Science Park.

I’ve heard suggestion that all Greenways should be designed to standards for equestrians. In some rural areas there are many easy options for such upgrades, but on these urban fringes it would involve huge extra cost for very few extra leisure trips.

Perhaps I should have entitled this article ‘Building new bridges’ rather than ‘Greenways’?