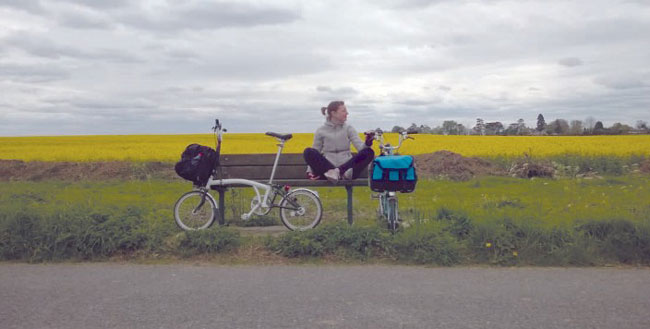 One of my favourite things about bank holiday weekends is that they enable me to venture further afield and test out new cycling routes. My friend Thomas and I recently decided to make the most of the extra day and link the two university cities of Oxford and Cambridge on Bromptons. We decided to travel by bus to Oxford and then pedal back in a leisurely manner. The weekend whizzed by, with a tail wind all along; had we opted for the other direction, we might not have started at all, warned our Route 51 guidebook (www.cycle.travel/route/oxford_cambridge/guide). 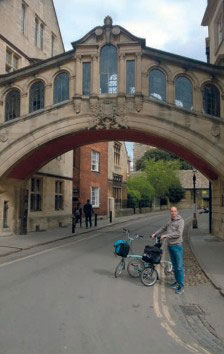 We hopped on the X5 bus at Parker’s Piece, our foldable bikes simply carry-on luggage. Oxford is very bike-friendly and it was easy to blend in, although the cobbled streets certainly kept us alert. After an afternoon spent exploring some more touristy spots, we cycled on the enjoyable and very well sign-posted countryside paths of NCN Route 51 to Bicester.

Finding accommodation en route in the UK is normally achievable, whether opting for a hostel, B&B, camping, or couchsurfing, but we were really excited to try out Warm Showers, a community designed specifically for touring cyclists. The website, www.warmshowers.org works like a social network platform for keen cyclists from all around the world. You look up a location, see who’s signed up and available, and can easily message potential hosts. Every member has a profile so that you can read more about them, and reviews left by other users, too. The scheme has lone cyclists, or couples or very small groups, in mind, and only those touring on bicycle. Hosts are not allowed to require any payment for the hospitality that they offer; however, I’d imagine that most visitors contribute in some way, help with the meal, bring some beer etc.

I often feel as if I could trust any cyclist, and that our community is mostly made of like-minded and friendly people, and Shayl, our host for the evening, certainly proved me right. He had just returned from a 17-month cycling trip around the world (his beautiful blog is here: www.offonmybike.com) and happily offered tales of cycling adventures – his story is an inspiration that will stay with me for a long time.

Our fantastic first experience of Warm Showers set us up for a great morning start the next day, continuing along NCN 51 to Bedford. After wooded lanes, it was yellow rapeseed fields as far as our eyes could see, on a dirt path fully suitable for our Bromptons. Arriving in Milton Keynes was something of a shock, but it gave us the opportunity to take the foldies to a well-known Swedish flat-pack superstore, to power up on their vegan meatballs – highly recommended to fellow cyclists on a plant-based diet.

I must admit that we did get some help from the railway at this point. The Milton Keynes to Bedford portion of the route was described in our guide book as ‘far from the highlight of the trip’, so we decided to hop on the train and rejoin the lovely riverside cycle path along the river Great Ouse in Bedford.

This is where having a few overnight options comes in handy, as all Warm Showers hosts were out of town for the bank holiday – hopefully on their bikes somewhere. Our Airbnb host family was a delight of fun and warmth. The kids were amused at our bikes which were just like their Transformers toys.

Just one more day and we’d be back in Cambridge. The route follows the old Oxford-Cambridge railway, and is beautifully hidden in undergrowth. We met a few runners, but otherwise had the whole route for ourselves, particularly lovely with the cool shade of trees. We opted for a route through the villages of South Cambridgeshire, which meant leaving NCN 51, and followed the National Byway from then on. National Byways (www.thenationalbyway.org) aren’t separated from car traffic, but we found the roads quiet and felt very safe overall. Another option is to head north via St Neots and Huntingdon and then on the Busway. However, South Cambridgeshire’s villages are simply charming and we didn’t want to miss out. The route took us through Gamlingay and Arrington: we were taken by surprise by the magnificent Wimpole Hall as we passed its iron gates, and were tempted in for a tea stop at their Old Rectory cafe. Next up were equally pretty Barrington, Haslingfield, Barton, Newnham, and finally Cambridge.

We’re rookies in the world of long-distance cycling, but this sort of short dabble could easily get you hooked. All along we were impressed by the quality of the paths and roads, the tranquility and immersion in nature they offered, and the near-perfect signposting throughout. On a mostly flat road and with a fair wind, the occasional uphills were a fun challenge. Three days allowed for a leisurely ride of the circa 100 miles, and being able to cycle or use public transport if needed made it especially straightforward.

We have since ventured out on a day trip to Bury St Edmunds (NCN Route 51) and the medieval village of Lavenham (NCN Route 13) and plan to explore further east some day soon. I am very much looking forward to hosting a Warm Showers guest soon – and hope to provide as warm a welcome as the one we received.

With special thanks to Oscar Gillespie for lending his Brompton, the beautiful Hecate, to our wonderful hosts, and to all those involved in developing such wonderful cycling facilities!