Longtime Cambridge Cycling Campaign member John Drew has sent in a loose translation he made with the help of his daughter, Sandhya, of Chilean poet Pablo Neruda’s ‘Oda a la bicicleta’.

‘There were certain problems in Englishing the piece. Skeletons for winged insects don’t seem or sound quite right. There were young people going to work at midday. And eventually the spirit of my pluralised bicycles wanted to be the spirit of all inanimate things. But I quite like the rhythm of the English version – I say that with a thousand rhythmical failures in the waste paper basket – though it is not the poem I would have written and it is no longer Neruda’s either.’ 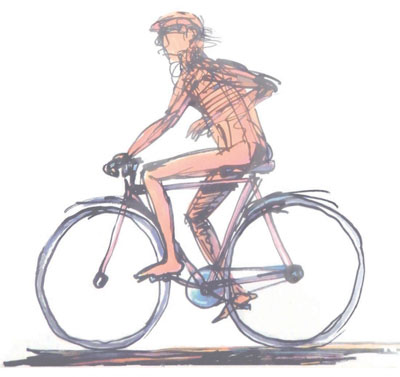 Bicycles
I was walking along
the white hot road,
the sun shucking heat
like popped corn
and the baked earth
stretching away
in an infinite curve
as if it were space
in the blue above.

Bicycles
suddenly passed me by
like winged creatures
in high summer,
stealthy, swift,
leaving no trace
but currents of air.

Young men and girls
in overalls
on their way to work
with only eyes
for the summer,
heads held high,
upright astride
their steeds of iron,
wheels whistling in tune
as they shot past
bridges, brambles and roses
into the sunlight.

I imagined the evening:
the men and the girls
washed and changed
raising a glass over food
in a toast to love and life
while left aside outside
the bicycles
stood inert.

And it struck me then
the spirit of things
is alive
only in movement,
things in themselves
not winged creatures
travelling through summer,
just cold skeletons
needing the flesh and blood
of vibrant human bodies
to set them in motion afresh
morning after morning.