We know that many of our members are employees of companies on the Science Park (including a number of Camcycle trustees) and find the 1970s infrastructure with poor cycling provision a daily frustration. Good news, however, is that improvements are on the horizon.

‘Your Park Day’ asked Science Park users and employees to comment on plans being considered for the Park, including, among many ideas, plans for transport infrastructure.

Recruitment officer Tom McKeown attended the event and reported: ‘There were hundreds of posters with various ideas for the Park printed on them. With red and green stickers to show support, and post-it notes to add comments.

In the transport area it was encouraging to see most of the comments I would add already on the walking and cycling posters, though there was also a similar number of depressing comments on the driving and parking posters – more car parking and faster car flow at the junctions – I quickly countered that.

As for concrete examples for change, one map showed proposed improvements. It had the main carriage­way left untouched with a new footpath added on the inside of the loop and the footpath on the outside of the loop widened for cycle and foot use. This was disappointing as there is space available for a better scheme. However, the plan was for the entire site and it was not fully clear to me how their example cross-sections related. Hopefully the detailed plans will be refined following Camcycle discussions.’

Later in the day Vice Chair Hester Wells and I met with the consultants for the Science Park, Odyssey (www.odysseyconsult.co.uk). We were pleased to find that the consultants had already found Making Space For Cycling and expressed their desire to use it to guide their designs. They also expressed an understanding that motor traffic at the Park is at saturation already. They were very receptive of the concept of separation of cycle and pedestrian traffic.

Other good news from the meeting was that at the east end of the Park, the current narrow passage with lots of ‘No Cycling’ signs is soon going to be turned into a proper entrance wide enough for cycle traffic, and the gate on Milton Road will go as part of the redevelopment.

Interestingly, the main loop road around the Science Park is actually an Adopted Highway, which will affect what can and can’t be done. It does, however, mean that legal TROs could be enacted and enforced.

The consultants are certainly keen to revise their plans and work with Camcycle for better facilities, which is a huge positive and proves that our work over the years and our publications such as Making Space for Cycling have had great effect. 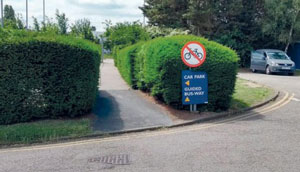 To aid with our Science Park work we are asking members to help by taking photos and documenting the issues they notice. You can find out more about this as well as keeping up to date with relevant news at www.camcycle.org.uk/sciencepark, you can also participate in our discussion on Cyclescape 2942.

Issues identified so far include: