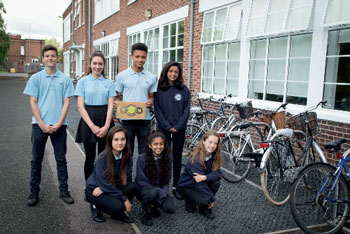 The Big Pedal challenge is an annual event organised by Sustrans and funded by the Bicycle Association through its Bike Hub scheme. This voluntary levy scheme raises between £300,000 and £400,000 per year, which is used to support projects working to ‘safeguard the future of cycling’ by encouraging more children to cycle safely and often.

From 6am on 20 March until 9am on 31 March, all journeys made by participating pupils, parents and staff either cycling or scooting to school were recorded. 1,693 schools took part in the Big Pedal with a total of 1,063,536 active school journeys recorded.

Coleridge’s average daily score was remarkable: 96.84%. The college’s involvement was led by its student ‘Sports Ambassadors’ who in truth seem slightly bemused by all the fuss – cycling is just a normal part of their school life. This might partly be the result of their regular involvement in various sports teams. Coleridge doesn’t bus all its students to sports fixtures; instead, Years 9, 10 and 11 cycle across the city to matches, whether to its two partner colleges or further afield to other opponents such as Chesterton College or Netherhall School. Sports facilities are shared between the Federation’s three sites and so there is likely to be a fair bit of bike traffic between the three locations: rugby at Coleridge, basketball at Parkside and football at new community sports facilities at Trumpington.

Travel to school plays a significant part in peak-time congestion: National Travel Survey data from 2015 found that, of school trips by 11-to 16-year-olds, 25% were by cars/vans and 18% by local bus. On a school journey of under 1 mile, 8% of children travelled by car/van and 2% caught the bus.

Cambridge’s strong cycling model, combined with terrible peak-time congestion, means that the number of secondary school students cycling to and from school far exceeds the national 2%. Given that last year saw the end of most standardised school transport subsidies for 16-to 18-year-olds, this emphasis on active travel, accompanied by appropriate cycling infrastructure, will be all the more welcome in encouraging active students, and subsequently active adults.