The Cambridge County Council cycling projects team, along with Camcycle, hosted the Dutch Cycling Embassy for two days of workshops for cycling and transport professionals working in the Cambridge area.

The two-day event started with presentations from each of our four guest experts about cycling policy in general and their particular areas of interest and expertise. Erik Tetteroo, the Embassy’s country representative for the United Kingdom and the main cycling policy advisor to the Dutch Ministry of Infrastructure and Environment, talked about his interest in the interaction between city development and bicycle-inclusive mobility. His colleagues Richard ter AAvest and Dr Rob van der Bijl both emphasised the importance of a multi-disciplinary approach to their work, spanning urban planning, transport, culture and technology. Jose Oudijk, the Embassy’s Programme Manager, shared valuable insights into a cycling nation in which many, like her, cycle at least 20 kilometres each day to get from A to B.

Camcycle led an afternoon cycling tour that took in some of the best and the worst cycling infrastructure in Cambridge. We enjoyed an extended tour of the Cyclepoint and the CB1 station development, which led to further delay when a new Ofo bike was spotted, resulting in a thorough examination and discussion about bike sharing. Whilst our guests unsurprisingly disliked some parts of our city, such as Newmarket Road and its complete lack of cycle provision, there were parts that they were delighted with. They enthused about Carter Bridge, the covered bridge over the railway tracks, as they had never come across such a weather-proofed bridge before (in fact when it opened in 1989 it was listed in the Guinness Book of Records as the world’s longest covered cycle bridge). However their favourite part of our tour was the pathway through Midsummer Common and Jesus Green along the River Cam, and they urged Camcycle to make sure more people know about this Cambridge gem.

That evening was the Camcycle monthly meeting where Erik talked about the Bicycle Agenda 2017-2020. This document has been drafted by the ‘Tour de Force’ (www.tourdeforce2020.nl/en/) a partnership between governments, business, civil society and research institutes. The underlying goal is hugely ambitious: to increase the number of kilometres cycled in the Netherlands by 20% over the next decade. Erik shared examples of impressive city infrastructure transformations, which show that such a radical change of modal share is possible. His hometown of The Hague was one of his case studies where cycling infrastructure has played a key part in public transport and place-making improvements.

We learned more about Erik’s key area of interest, ‘Hybrid Oriented Design’, which looks at the combination of cycling infrastructure and public transport hubs to increase the catchment area of railway stations and develop communities with the ideal level of density.

One point that certainly stuck with our audience was the comparison between the Netherlands cycling spend per person of €33 to €80 and the UK Cycling and Walking Investment Strategy planned expenditure of £2 to £6. The meeting was live-streamed on our Facebook page and can be viewed there for anyone who would like to watch the presentation.

Day 2 of the visit had focused workshops on network planning and junction design. Network planning encompassed a truly holistic approach to planning how people move around, regardless of the method of movement. A point raised by our Dutch visitors was the tension created by major bus routes going through the heart of historic cities. They suggested a number of other cities which had changed how they had structured their bus network to be sympathetic to their city centres, including Ghent, Oldenburg, Hasselt, and Groningen. 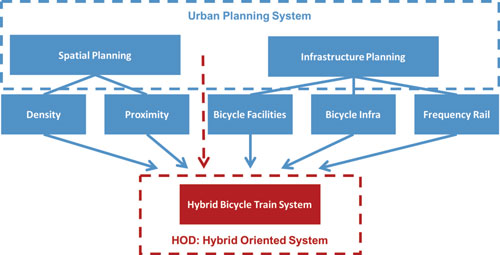 One suggestion that arose from the workshop was to build good cycling routes around the city centre and so increase the area of influence of the core traffic scheme. The networking workshop concluded that there would need to be four types of bus network: (1) intercity buses; (2) regional buses like the Guided Bus; (3) local buses that serve the city, and (4) small buses that can move people who can’t walk very far, just like the Addenbrooke’s bus.

In the junction design workshop, people discussed various options such as protected roundabouts and traffic signal junctions. A safer roundabout lowers traffic speeds through careful design, ensuring ample reaction time for all users, and increasing capacity by making it easier to merge. The walking and cycling paths around the roundabout should be kept separated by at least 5 metres from the roundabout proper, and should be given priority in built-up areas by using parallel Zebra crossings.

There are a number of ways to offer protected cycling at traffic signal junctions as well. Richard recommended that people cycling be kept separate from motor traffic by using cycle-specific signals. He also suggested that in some tightly constrained places, the idea of ‘All-directions Green’ for cycling was best.

Here in Cambridge we already have some informal ‘All-directions Green’ junctions, such as Arbury Road junction on Milton Road, but that kind of junction has not yet been recognised formally in Britain. Appropriately, the workshop was followed by a visit to the Queen Edith’s Way junction, set to be the site of the first real Dutch roundabout with priority for walking and cycling in Cambridge.

The Embassy visit garnered a lot of media attention which hopefully will help to get public support for the Dutch-quality improvements that we would like to see in Cambridge. Perhaps one day we will even see the same levels of cycling investment in Cambridge that are normal in the Netherlands.