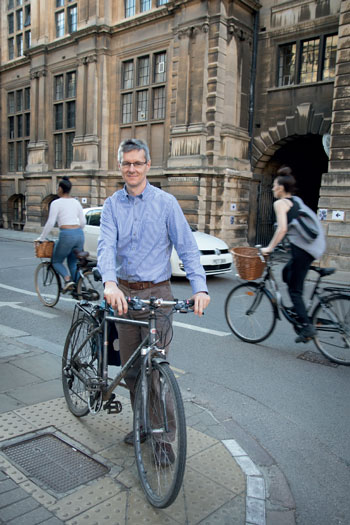 My Cambridge story is typical of many. I came here to study, and 25 years later, despite one or two short periods elsewhere, I’m still here. There is something about the geography of Cambridge and the layout of the university that, for a student, means that using a bike to get around town is instantly ‘normal’. You were the weird one if you didn’t cycle, and that is probably why it still seems weird to meet people in Cambridge who don’t cycle. I had a head start – we always had bikes as children. They represented freedom – the ability to go places and do things, without relying on parents. I’m now a cycle commuter and a leisure cyclist, but also a car-driver and a pedestrian – and mostly I choose to get around by bike.

My first contact with Cambridge Cycling Campaign was nearly 20 years ago when I was working on the Science Park. I sometimes commuted by car, and sometimes cycled, but was always staggered at how aggressively unfriendly the site was to bike commuters. It just seemed that it would obviously be better for everyone if more people cycled, and obvious that more people would cycle if the access was better for cyclists. It was great to discover that there were already people organised in a campaign group and working on the case.

Camcycle is lucky to have some seriously committed volunteers, and has some major achievements already, but when it comes to volunteering, I think every little helps. I am currently Treasurer of Camcycle, which is a registered charity. It is good to be able to use my professional knowledge to help out, but for other campaign issues, I feel I can duck in and out.

The most motivated campaigners are often those focusing on the things that they see every day. For me, it’s the ‘cyclists dismount’ signs on the Green Dragon bridge, that serve no useful purpose, that councillors have agreed to take down, yet still steadfastly remain. It’s that annoying pothole that gets you every time. It’s the new cycle routes that could be amazing, if only they could get the details right. With tools like Cyclescape, whatever your cycling issues are, you can find others to help and support getting things done. If there is one big thing I would like to help with it is getting cycling right in new developments – building new cycling infrastructure in narrow medieval streets may need compromises, but large greenfield sites – there’s no excuse not to get it right.

So why am I involved? For me, cycling is a quality of life issue, and I want others to share in that.

My journey to work is a gentle ride from Chesterton to an office near the city centre. It’s never really a chore. You are engaged with your surroundings. When the cows are blocking your path on Stourbridge Common, you can see the steam rising from their breath. You can hear the cox shouting to the novice rowing crew as it zigzags its way down the river. You are in charge of your own destiny – I know that I will arrive at work 15 minutes after I leave home. And on a warm summer’s evening, cycling home from work alongside the Cam is just idyllic. I couldn’t imagine choosing to drive two hours a day (‘on a good day’) to and from work, or squeezing into a crowded train carriage at the crack of dawn – cycling is a big lifestyle win. If only we could build more of the houses close enough to where people work so that more people could commute by bike.

When in a car, you are stuck in a world on your own. Cycling is much more interactive. Waiting for the lights to change at the bottom of Castle Hill one evening after a busy day at work, I caught sight of a friend walking past, waved and said hello. At that point, the cyclist next to me realised we knew each other, and we hadn’t been in touch for a while. ‘Oh, hello, how are you?’. So when I then glanced the other way again, the complete stranger on the adjacent bike also felt the need to grin and say hello. Then the lights went green and I cycled off with a smile.