The city of Mannheim in southern Germany has an interesting transport history, as within 70 years it was both the birthplace of what can be argued to be the first evolution of the bike, and the site where the first automobile was built, in Karl Benz’s workshop.

It is obviously the first of these that is of interest to us and on 12 June this year the city will hold a big festival celebrating the 200th anniversary of the velocipede (‘swift foot’), also known as the ‘Laufmaschine’ (running-machine) or Draisine after its designer. Although it failed to catch on, the machine is of great importance as it introduced the principle of a self-stabilising two-wheeler, the fundamental principle of almost all the bikes we ride today.

Karl von Drais, a local forest-master and aspiring engineer, was interested in improving human transport. His first attempt was a four-wheeled vehicle capable of carrying four passengers and powered by one of them winding cranks using their arms and legs. Drais believed that he had revolutionised public mobility and demonstrated his invention before the international bigwigs assembled at the Congress of Vienna in 1815. The patent examiners, however, were less impressed and denied that his design gained any ground over walking.

Drais became convinced that propulsion using the striding movement of riders’ legs would provide the most efficient way to use human power, making mechanical drives unnecessary. Drais’s inspiration was that if the construction was much lighter this would reduce the effort needed to move the vehicle so much so that mechanical gears would not be required. It followed that if there were no mechanism to carry about then the frame could be lighter still, which led to a completely new design: a two-wheeler with a rider on the saddle, who moved it forward with a running motion.

Whilst Drais developed his ideas, events on the other side of the world dramatically brought the need for new means of transport to the fore. In April 1815, the volcano Tambora, in the Sunda Islands of Indonesia, erupted, killing tens of thousands and throwing 160 cubic kilometres of volcanic ash up to 43km into the stratosphere. Finer ash particles blocked sunlight from the Earth’s surface, bringing hailstorms and flooding and possibly explaining the global drop in temperature of 0.4-0.7° C recorded over that summer. A frosty spring in 1816 caused widespread crop failure, and grain prices in Strasbourg (over the Rhine from Mannheim), almost tripled between 1815 and 1817. Grain scarcity not only triggered widespread famines in Europe and North America, but also a transport crisis as land transport relied almost entirely on grain-fed horses.

It was against this backdrop that, on 12 June 1817, Drais made his first public demonstration of the velocipede. He set out from his house in Mannheim to the relay station near the neighbouring town of Schwetzingen. He made the 15km round trip in a little over one hour, a comparable speed to long-distance horse travel and 2 to 3 times the speed of a pedestrian for the same effort, as 4-5 metres could be covered with one stride. One onlooker noted: ‘The rider pushes the wheels along when they won’t go alone and rides them when they will’.

It is important to recognise that Drais’ journey took him along the area’s best paved road. Generally, road conditions were very poor, country roads were rutted and muddy, and city roads paved with cobblestones. Urban riders chose to ride on the footways where they were available but, just as in Cambridge today, this was frowned upon as it endangered pedestrians. Within six months of the velocipede being publically available Mannheim had banned people riding the machine in the city, except in the park of the palace – a suitable location as the machines rapidly became a fashionable hobby for the wealthy. Other cities followed suit, from Philadelphia (1819) to Calcutta (1820), and most of these bans are still in place (though children always seem to get away with it!).

As people were not generally familiar with balancing an object, several public demonstrations of the Draisine ended in broken bolts and subsequent derision. There was a fear that not only bolts would be broken and in 1819 a recommendation was made by London surgeons not to ride the machines nicknamed ‘dandy-horses’, copies of Drais’ patented design such as the ‘pedestrian curricle’ built by Denis Johnson.

So what about Drais’ ‘unnatural’ stabilisation? Though believing in a natural mode of propulsion, Drais’s new invention introduced a principle unseen in nature: a machine that is self-righting when set in motion! It could be stabilised by steering the front wheel, even with both feet off the ground. A bicycle cannot stand upright unsupported, so has a low static stability compared to a four-wheeler, but once it moves forwards (at about 21km/hr with a modern bike), although when I experimented with my own bike this was 23km/hr (www.youtube.com/watch?v=w4KEQmyUwyU) the bicycle self-stabilises and gains dynamic stability – even if the rider does not hold the handlebars, or is not sitting on it at all.

Moreover, a two-wheeler has a much higher stability in sharp turns than a four-wheeler, as the cyclist can balance by leaning into the direction of the turn. It is unknown how Drais got the idea that two-wheelers self-stabilise, but he might have learnt to balance while ice-skating which he reportedly enjoyed. He might also have learned intuitively to set his velocipede in motion slowly by driving wavy lines and falling from the left to the right foot and back until the machine gained such a speed that it stabilised itself. 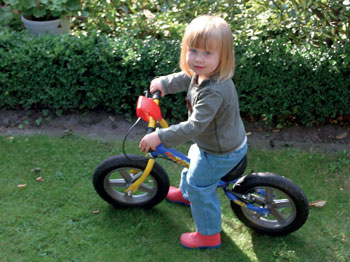 The physics of bicycle self-stabilisation were first described analytically in the 1890s by the French mathematician Emmanuel Carvallo and a Cambridge undergraduate Francis Whipple. The first effect responsible for bicycle stability, the gyroscopic effect, is caused by the angular momentum of the spinning wheels, causing the main axis of the bike to return to its initial position after disturbances. Another stabilising force, also involved in making turns, is the trailing effect: when the front wheel contacts the ground behind the steering axis of the bike, it will be aligned with the direction the bike is travelling. When the bicycle leans to the left, a torque acts perpendicular to the angular momentum of the spinning wheels. In order to maintain the angular momentum, the gyro of the wheels performs a precession, the front wheel accelerates to the left, and in order to minimise its potential energy, the bike steers to the side it is leaning.

Altogether, at least 17 different parameters are crucial for keeping a bike upright – and this is without taking into account the correcting actions of the rider.

My daughter started out with a balance bike (above). For her third birthday we then bought her her first real bike which arrived without the pedals attached. We left the pedals off for the first few months so that she could use it as an advanced balance bike. The evolution of an individual cyclist often mirrors the evolution of the bike, beginning with a balance bike before progressing to a pedal bike (but luckily without the penny-farthing stage).

Last summer in German museums I noticed a couple of references to the Draisine. I really don’t think this counts as the first bike and yet, when I saw that the Tour de France is starting from Düsseldorf on 1 July 2017 I realised that the Germans were gearing up to celebrate the bicentenary of a great German invention. Hang on a moment!

I’m not for a moment claiming the bike as a British invention (in particular the evidence relating to Kirkpatrick MacMillan in 1839 seems wholly anecdotal) but rather I think there was an evolutionary process that has not yet been fully explored. After the appearance of the Draisine in 1817 nothing much happened until 1861 when the boneshaker was invented in France (or possibly in Germany in 1853) and 1867 when the first pedal-driven velocipede appeared. The high-wheeler or penny-farthing was developed in 1870 or 1871, and only now did cycling begin to take off, although only as a hobby for wealthy and athletic young men. In 1879 Henry Lawson invented the bicyclette and in 1885 the first recognisably modern ‘safety’ bike was released – although contrary to general opinion it didn’t have the familiar diamond frame for a few more years. Pneumatic tyres were also crucial – they were invented in 1845 but only mass-produced (by Dunlop) from 1888. So which anniversary should one go for?