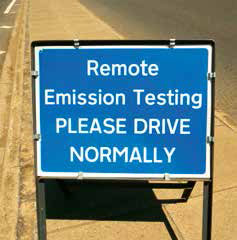 Dr Alison Greig outlined some background information about what air pollution is, and the characteristics and constituents of air pollution. Two important forms of urban pollution are the various nitrogen oxides (NOx) and small particles (PM) produced by car/HGV exhausts. Both are related to an increase in premature deaths. Particle size varies and matters. The smaller the particle the greater the penetration into the body. Particles of less than 1.0 micrometre (a micrometre is one millionth of a metre) will penetrate to the bottom of the lungs, to the alveoli. The particles will remain permanently in the lung tissue and can be inert or toxic.

Other molecules can hitch a ride on the particles and be involved in chemical reactions in the lungs. The WHO (2014) estimated that worldwide there are seven million premature deaths annually linked to air pollution. The health effects include: stroke; heart disease; lung disease, including cancer; and chest infections, especially in children.

Dr Greig pointed out that whilst facts are important they are usually easily available and the more important thing is to ask ‘so what…?’ questions about factual information. For example: ‘so what more do we need to know or understand?’ and ‘so what can we do about this situation?’ The Global Sustainability Institute produces a free newsletter entitled ‘So What?’ which is available from the foyer of Anglia Ruskin University

Jo Dicks from the city council talked about air pollution in Cambridge and what his team is doing about it. He confirmed that road traffic is the main source of pollution, accentuated by narrow congested streets, a large quantity of commuter traffic, and population and employment growth. His estimate is that there are approximately 250 premature deaths annually in Cambridgeshire due to small particles in the air.

There is concern about pollution in China because it can be seen. The danger of Cambridge pollution is that is usually not visible…

Under the Environment Act 1995 the council has a duty to review and assess air pollution and a duty to take action in pursuit of national air quality objectives. They do not however have a duty to meet these objectives. The council measures NOx using diffusion tubes at 50 locations around Cambridge. The tubes are changed and measured every month. Both NOx and PM are measured continuously at five sites within the city centre. Current and historical levels can be accessed online.

The council has been aiming to reduce NOx to below 40 micrograms per m3. This level is frequently exceeded with hotspots around: Drummer Street; Hills Road, Gonville Place junction; Station area; and Newmarket Road near Elizabeth Way bridge. Much of the focus is on pollution caused by taxis and buses. The council’s policy has been to support Stagecoach to upgrade buses to Euro 6 engine standard.

The council wants all new taxis to be low emission or electric within five years. They are proposing that there will be electric vehicle (EV) only taxi ranks. They have put a bid in for providing EV charging infrastructure. A bid for a grant to support the introduction of fly wheel/ hybrid buses has failed. On the plus side, Jo Dicks’s department has managed to ensure that any proposals under the City Deal will have to consider their impact on air quality. They are working with county colleagues on city access controls, although these details were not specified.

Heather Wallis talked about how humans respond to big problems such as air pollution. Coping mechanisms such as alcohol, drugs, sex, food, shopping may produce short-term distraction but ultimately fail and can lead to negative emotions harmful to health. Similarly, compartmentalising problems by putting them into a ‘box’ is not a solution. Difficulties need to be rebalanced by positive ones such as love, joy, and peace. So how can these positives be attained? Heather Wallis suggested the following: going for walks; listening to music; self expression through talking and creativity; friendship; and good nutrition. I would like to add cycling as well! As there is often a feeling of powerlessness when faced with big problems it is important to ensure that we take power back over our own lives. This requires seeking help and support from each other. Asking ‘what contribution can I make?’ rather than trying to solve the whole problem is more realistic and empowering.

Overall this is a worrying problem. So far there are no agreed traffic reduction plans. There is concern about pollution in China because it can be seen. The danger of Cambridge pollution is that is usually not visible as the particle sizes are smaller. The problem is aggravated by buildings either side of roads which trap the polluted air. Most stationery vehicles do not cut off their engines when in queues.

Thankfully I’m a cyclist, so I can find routes freer of vehicles.

Full presentations can be found at www.u3ac.org.uk/environment/