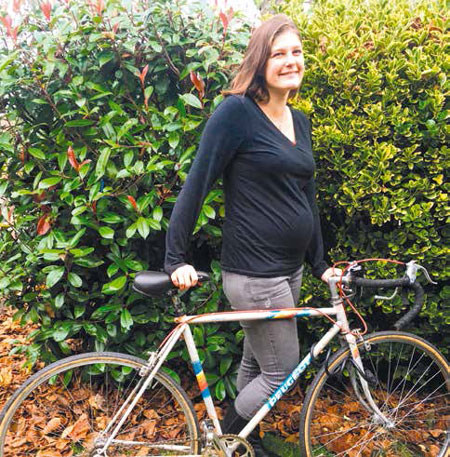 I don’t remember when I started to identify as a cyclist, but it has always been one of my favourite ways to get around. When I was in my third year of university, my parents invited me to join them on a century ride – and without thinking (or training!) I joined in. There were only three hills, but they were at miles 97, 98, and 99. I remember my head almost bobbing into my spaghetti dinner afterward.

In my family, I was the last person to discover cycling but am the only person to have become a regular cycle commuter. My mother found a beat-up bicycle at a B&B whilst on holiday one summer and spent two weeks cycling all over rural Michigan while my sister and I went to the beach and my dad played the guitar. A few years later, in his late forties, my father became a lycra-clad fanatic, sweating his way around the suburbs for fifty or sixty miles at a time. My sister was a competitive road cyclist in high school.

I own a pair of padded shorts and a beautiful Trek that my dad bought for me, but I have used each twice in the last five years, preferring instead to rely on the Peugeot with the rainbow detailing that I got for $20 at a police sale in 2003. I think that bike signaled the beginning of my love affair with cycling as a means of transport rather than exercise. When I moved to upstate New York in 2006, I began to cycle all over the small (but not cycle-friendly) city where I was studying, wheeling my bike into lecture halls when I couldn’t find parking. There was one big hill I climbed as part of my regular commute where I got catcalled more than I ever have anywhere else in my life – people would yell ‘almost there, honey!’ or ‘good for you!’ as I panted my way up the final stretch.

Since then, I have organised my life around cycling. I have avoiding living in places where I was reliant on cars (I hate driving). I cycled year-round in Boston, Massachusetts and, as an employee at a university estate office, helped to place the docking stations for Hubway, Boston’s answer to Boris Bikes. By the time my husband and I moved to Cambridge in 2011, I was a committed cycle commuter.

I consider myself extremely lucky to live in Cambridge for all sorts of reasons, but among them is that we have not needed a car in the five and a half years we have lived here.

The only time I have taken a break from cycling is when I had a child in 2014. I cycled all through my pregnancy, including to the Rosie Maternity Hospital whilst in early labour (I came back the next day in a taxi). Getting a child seat for the bike when my son was old enough was a parenting game-changer – I felt such a sense of freedom. We have noticed, too, that my son has a spatial awareness that my husband and I did not have as small children. He knows his neighbourhood from cycling and walking through it in a way that a child confined to a car seat never will.

Now that I am pregnant again, we are thinking of getting a Dutch cargo bike (so there is no need to take a break from cycling until kids can hold up their head). We are cycling family, and I hope we always will be. It’s fun while it lasts and it’s faster than walking.

I was thrilled to join the Camcycle trustees as Press Officer in 2016. I did some work with local media in previous jobs and am always happy to speak (at length!) about the value of cycling to communities and individuals. I have loved learning from my fellow trustees, who have an astonishing wealth of knowledge about individual projects in the region and about the minutiae of cycle planning, and as an urban planner I’m excited to bring my past experience to the Campaign.

My first responsibility is to take charge of a new cycling column for the Cambridge Independent, so look out for my, or another Camcycle member’s, byline.