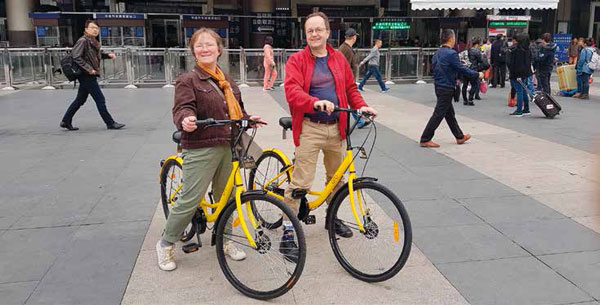 Last month we made the bureaucratic and expensive crossing from Hong Kong just over the Chinese border into Shenzhen, where most of the people we met expected us to be there for the ‘copy-shops’, which I took to be places selling copies of branded watches and handbags. However, we were only there to have a ride on the yellow Ofo bikes.

Ofo was only one of at least four rental bike schemes available on the streets: the others were BlueGogo (deep blue), Mobike (silver and orange) and Xiao Ming (light blue).

We arrived at about 10am and the bikes were immediately evident in the large square around the station. We saw people arriving on the bikes and parking them in clusters with other bikes. I should say that there was little in the way of any official bike parking and hardly any bike stands anywhere. There were pockets of places where bike parkers had found natural places to leave them in clumps.

There was a larger area off to one side of the station near a cycle/pedestrian route which looked as if it was intended as the main bike parking corral. I’d say that about 80% of the bikes parked around that station were from these four schemes, the rest being private bikes, also locked up to themselves.

We did notice security officers in uniforms tidying up the bikes in the main square. Carrying them by the scruff of the seat, they were moving bikes that had presumably been left in inappropriate places and parking them tidily in clumps.

The bikes are basic: steel, no gears, no lights, but including mudguards and kick stands. Compared to the ‘Boris Bikes’ in London these are very much lighter but don’t appear to have been designed with heavy use in mind. The hardest-wearing feature was probably the hub brakes – this was common to all four schemes, at least on the back wheels – a few bikes had calliper front brakes. Mobike and Bluegogo had baskets.

All the schemes had wheel locks around the back wheel intended only to lock the bike to itself. Ofo bikes use a combination lock built onto the wheel lock. The way it works is that users register through an app on their smartphone (i.e. this requires mobile data connection – it won’t work via SMS text messaging alone) and then find a bike that they want to rent and key in the registration number. The app responds with the combination code that releases the bike and away you go. Curiously that code doesn’t appear to change between hires!

We found it impossible to use the Ofo app to rent the bikes. It requires being able to read Chinese and having a way of paying. We were very lucky to meet a friendly fixer who, when he realised we weren’t remotely interested in copy-watches, was happy to release two Ofo bikes on his personal account – and he didn’t want any money from us!

Each of the Mobike and Bluegogo bikes had a solar panel in the front basket which presumably was there to power a more advanced locking mechanism over the back wheel. Their bikes have a Quick Response (QR) code on the headset. Scan this with a smartphone and the app releases the bike. It could be that GPS, on the smartphone or the bike, is used to log the start and finish of each journey as a way of monitoring bike use.

Cambridge has form with bike share when the green bike scheme was trialled by the city council in the early 1990s with very limited funding. Abandoned and donated bikes were restored to working condition, painted green and placed against designated racks around the city. Anyone could take them for a ride and leave them anywhere. Five hundred bikes were distributed but they soon disappeared. That first attempt was a steep learning curve, but the underlying principle of 24hour on-street bike hire is now established infrastructure in many big cities worldwide.

These new schemes strip out the designer bikes and docking stations that make the established city bike schemes so expensive to install. They are a rebound back towards the simplicity of the green bike scheme. What is back is leave-anywhere, but what is new is branded, colourful, easy-to-use bikes that are regulated by 21st-century technology of QR codes, smartphones, GPS and solar panels. The system will be promoted through social media as friends recommend the bikes to each other.

Everyone wants to know if they will work in Cambridge. The fact that there are at least four competing schemes working in China is a strong indication that there is a market and a solution there. So it is up to the institutions of Cambridge whether they should welcome or shun the scheme. Cambridge has a problem with lack of cycle parking spaces in the central area. It could be that the Ofo bikes would ease pressure on cycle parking rather than increase it because the bikes will be more fluid. Contrast this with CyclePoint at the railway station, undoubtedly a great achievement for the city but ultimately it contains 3,000 bikes that sit there for most of the working day doing nothing.