Jim Chisholm and Roxanne De Beaux joined over 100 other attendees for a great day meeting other cycle campaigners from around the country and learning from some excellent speakers during the plenary sessions and workshops.

The first plenary session stood out as unusual due to the rare presence of more women than men on the panel. In fact, the entire conference was notably more diverse than previous conferences by gender and age (at least as observed by this reporter in recent years). This is a good sign that the diversity of campaigners is increasing and an indication that cycling and the campaigning world are becoming more appealing to ‘everyday’ cyclists. 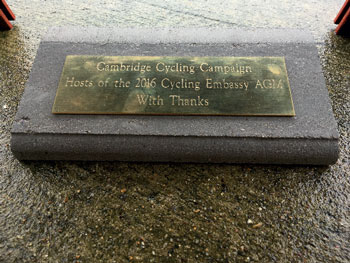 Some of the topics covered during the conference were:

At the end of the day an award was presented to Camcycle by the Cycling Embassy of Great Britain. We were given a ‘Cambridge Kerb’ with a plaque in thanks for our hosting the Embassy AGM earlier in the year.

All in all, the day was very informative – it was great to see some new faces on the stage and in the crowd. A huge thank-you must be given to Jonathan Fingland from Greater Manchester Cycling Campaign for all the work he put into organising, as well as to the team from St Albans who did a great job of hosting the event.

As always, Jim has some interesting facts about St Albans. At one time this tiny city boasted more cycle parking spaces than Cambridge! We have certainly now surpassed them with our Cyclepoint station parking.