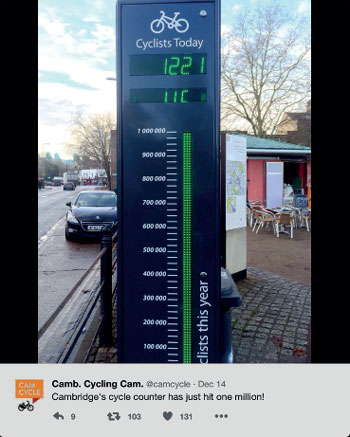 The bike barometer on Parker’s Piece near the Gonville Place crossing has kept count of Cambridge’s cycles since it was installed in 2014 (see Newsletter 115).

This December was the first time it reached the one million mark. A keen group of campaigners had been keeping an eye on the counter and this exciting milestone was officially announced on Twitter around midday on 14 December.

While we missed the precise moment we were no less excited to celebrate it and did so in style a few hours later on a cold but clear December evening. A rush of emails were sent, ‘One Million Cycles’ posters were printed on bright paper, Christmas lights were used to adorn bikes, chocolates were bought for distribution and in the end we managed quite a good last-minute celebration.

The party of campaigners cheered on cyclists who cycled past and were joined by Hilary Holden from the City Deal team and by Romsey Councillor Anna Smith. This spectacle was certainly noticed by drivers stuck in the after-work Gonville Place traffic jams.

A lucky ‘one millionth’ cyclist was selected, Jez Climas, an engineer with Max Fordham, St Andrews Street, and he seemed very pleased to share the moment.

The barometer shows the daily total of cyclists, and the position of the detectors allows riders to see their count being registered as they pass. To reach the one million mark means that the average daily total for 2017 exceeded 2,500 cyclists using this route – something which Cambridge can be very proud of!

Let’s name the occasion ‘One Million Cycles’ Day and let’s see how much earlier it will be in 2017.