Apparently we don’t see most of the things we see. Well, that’s my interpretation of some research called ‘The Uniformity Illusion, Central Stimuli Can Determine Peripheral Perception’. The authors are based in the Department of Brain and Cognition at the University of Amsterdam. So what does the research say?

Well, as you all probably know, when you look at something you focus on the object and use a very small area of your retina to look at the fine detail of the object. It is something called the fovea that does this, mainly because it has lots of light-receptive cells all packed together so that you, for example, can read the words in front of you now. Surrounding this area is a much larger, much less detail-oriented area of the retina.

The researchers got test subjects to look at a number of images that each had a visual illusion. For example, my favourite had lots of circles in the centre, and lots of other four-, five-and six-sided symbols around (see below). Except that when you look at the centre of the image, all the other objects around become circles as well. This feels slightly freaky. 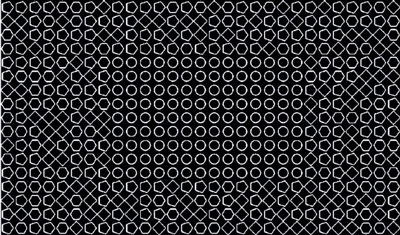 So what does this have to do with cycling? Well, ever noticed that you failed to see a cyclist when driving? Or when you are riding a cycle you are almost hit by a much faster-moving larger vehicle? Well, they may have imagined that you were not there.

Our visual system appears just to make up the details. Filling in the gaps in our visual field with things that it thinks are there, and ignoring the things that it doesn’t see. So, as you approach that roundabout, you are looking at the car, and the area around the fovea is not seeing the person on the cycle also coming around. And this doesn’t just apply to people on cycles, it would also apply to people walking across a side road as you turn into that side road.

As we probably can’t change the human brain to enhance our peripheral vision, could we make the roads safer, given this knowledge?

Well, one thing we could do is design junctions where we don’t have to look for multiple different-sized things near each other at the same time – such as a roundabout that puts everybody in the same physical space. The so-called Dutch roundabout proposed at Queen Edith’s Way solves this by having completely separate rings for people walking, people cycling and people driving. As you approach in a car, you first have to give way to people walking, and then people cycling, and then people driving. One at a time. And it is this one-at-a-time approach that is important. You can use your fovea to look for the man walking his dog, and then the woman cycling to her friend’s house, and then the couple in a car. At no point do you have to look for cars and bicycles at the same time.

Some people will complain that you have to give way more times: a maximum of five times, I think. But surely it is better to give way five times than give way once and hit the person your brain didn’t perceive.