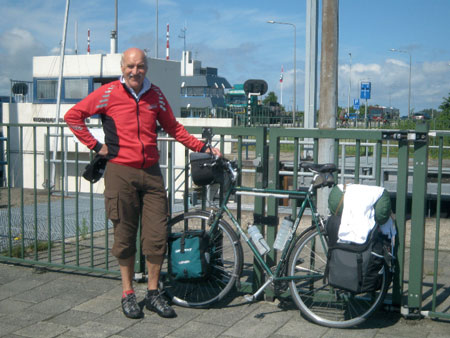 It seems that, on and off, I have always cycled. From riding my British-built Raleigh to primary school in Mafeking (South Africa, of ‘Siege of …’ fame), by going over the cattle grid from the Imperial Reserve (British expats’ headquarters in the, then, Bechuanaland Protectorate), into the busy stream of pedestrian, cycle and bus traffic coming from the ‘Location’ where the ‘natives’ lived, over Cecil Rhodes’s ‘Cape to Cairo’ railway line and through the Afrikaner railway workers’ section and to the ‘whites-only’ school. (That’s how it was, folks.) And in the holidays I explored the arid bush around my home, on my bicycle rather than my dad’s horse, which only went where it wanted to. Then we moved to the wonder of verdant Salisbury (Harare) in what is now Zimbabwe, where I soon got to know the greater city, exploring extensively on my bike. I thought I had arrived in heaven, a heaven which included many cycle paths and much more rain than the Kalahari.

Then followed the cycling gap when I ‘grew up’, went to university so did not cycle but had a scooter, travelled and came to settle in London, and bought a motor bike. There it slowly dawned on me that bicycling would be great. Uncluttered by helmet and leathers I could enjoy the weather and, when not being driven into the gutters by the careless motorists and hostile cabbies of the 1970s, it sort of felt like flying. I moved to Brighton where I bought my first brand-new bicycle, kept proudly in the hall of my flat where all visitors were encouraged to genuflect and admire the classical beauty of my steel-rimmed Raleigh – the very bike on which I joined the early London to Brighton cycle rides and learned the joys of touring Brittany. When I came to live in Cambridge I bought a wonderful Mercian and for much of the 1980s kept very fit commuting from east of Fulbourn. The route was via Fulbourn Old Drift and The Tins, so mostly free of fast motor traffic, and it was wonderful; and I learned that, weatherwise, there were really not many days in the year that I could not make it to the city on a bike. Later, when working for the University as a building surveyor I used to travel to my various sites around the city, and used a bike trailer to take cricket coaching kit easily and smugly anywhere in greater Cambridge without getting caught in the rush-hour traffic. In between times I have gone cycle touring and camping in England, and along lovely paths and rivers in France and Holland, and would love to do more.

By chance I became a member of Cambridge Cycling Campaign almost from its inception because I was keen, in principle, on its ideals, but was mostly a sleeping member, not helping much other than at the odd stall. On retirement I have become more active, preparing the Campaign position paper on Tenison Road (they went ahead with it anyway), being part of the team to organise an educational bike infrastructure tour in 2015 to Assen and Groningen, and more latterly assisting with the complicated financial requirements of a subscriptions-based charity.

What I have appreciated most being a member of Camcycle is seeing policymakers being encouraged to look properly at the contribution that cycling can make to easing traffic congestion and hopefully improve people’s health, and that to achieve these aims joined-up thinking and joined-up cycling infrastructure are essential. And I have mostly bathed in vicarious pleasure at other committee members’ efforts and achievements in this area. Seeing the success of the Busway cycle track, Cyclepoint parking at the station provided after years of campaigning, Hills Road and Huntingdon Road cycle lanes, watching the progress being made on the Chesterton cycle/pedestrian bridge and the Chisholm Trail, and, recently, the potential of the Greenways is all very exciting. I wish for Cambridge to stand as an example for the rest of England to follow.

I suppose the best thing I could wish for Camcycle is for it to become unnecessary, that the facilities are all so improved as to render the Campaign redundant. Fat chance! But I do wish it to be an effective and flexible campaign, working for a great cycle infrastructure within a modern public transport system, and able to make a constructive contribution to the challenges that will be introduced by technological change, be it light rail, driverless cars and taxis, or electric bicycles.

To those considering becoming a member I say, ‘Please do’, even if you only cheer from the sidelines, but, if you can assist, so much the better. Camcycle needs people with a wide range of skills, and I am sure we could use yours. Also, it is a really good way to learn and keep up to date with the very important things going on in Cambridge, and a way to meet interesting people and get into a healthy lifestyle.

And finally the most inspiring part of my cycle journey has been seeing the newest generation of young parents using the cycle lanes, with their Dutch Bakfiets-type child transporters and accompanied by older children on their own bikes. These are cyclists of the future and the people to whom we owe a responsibility to provide the infrastructure, to allow them good local transportation and a healthy lifestyle. So when soon, I hope, I see these same people using the Chisholm Trail and the new cycle bridge across the river to Chesterton I will know that ‘the times, they are a-changin’. They must.