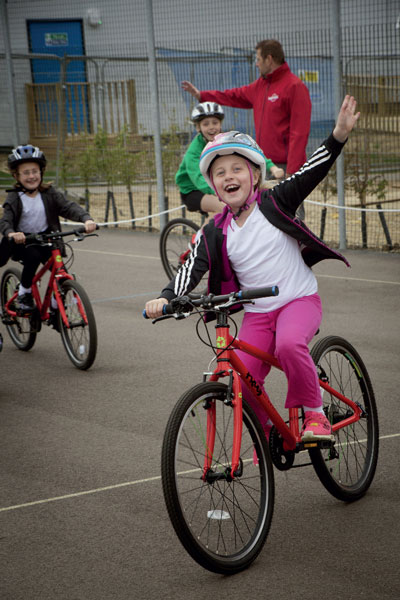 Cycle training is often called into question when it comes to building ourselves into a cycling nation. I thought I’d take a look.

Over the years I’ve had people bring up the following subjects:

Now, a few years back, I’d have agreed wholeheartedly with these concepts. However, having spent a considerable amount of time since then involved in BikeAbility (see www.bikeability.org.uk/). I think it’s a lot more nuanced than that. There’s just a lot more to it.

We’ll start with cycling levels. A study (www.camcycle.org.uk/jumpto/cyclingtoschool) commissioned by The Association of Bikeability Schemes in 2014 found that ‘trained children reported they cycle more often, cycle more to school, cycle more on the road, cycle with more confidence on the road, and enjoy cycling more’.

There it is, BikeAbility does, in fact, increase numbers riding to school. The obvious caveat is that this is still nothing like the revolutionary change in numbers required to make ourselves a cycling nation. What’s important to note is that TABS agrees with that last caveat. That’s right, the people who deliver this training do not think it’s the be all and end all of cycling.

Training is not an alternative to good infrastructure

Infrastructure is the way forward. Full Stop. It is the way in which we get more people riding, more often, and further. This needs to be done at a national level, with national standards, with joined-up thinking between different authorities. At the moment we have small schemes, that do help locally, but are a long way from delivering the cycling infrastructure needed to make a difference nationally.

What would it take to do this? Well, the Dutch experience tells us a minimum of £20 per head per year is something like it (www.camcycle.org.uk/jumpto/uk200yearsbehind). Around £2bn per year nationally (www.camcycle.org.uk/jumpto/eurosforcycling). And we’d need to do that for decades to catch up with the Dutch. Should we drop BikeAbility for a year or two and put that money into building? Well, at the last round BikeAbility got £50m for 4 years’ training (www.camcycle.org.uk/jumpto/bikeabilityfunding). So that’s £0.0125bn we could add into that £2bn per year, or less than 1% more. Anyone think that’s going to make any difference? Me neither. And in the meantime children everywhere are not involved in any kind of formalised cycling fun.

Is it all about forcing children in front of lorries, getting them battle-scarred so they will either adapt (like the 2% of vehicular cyclists) or run away? This premise suggests that the majority of kids learning will never do it again. We know that doesn’t happen. And actually BikeAbility is so much more than that.

For a start, Level 1 never goes near a road. It’s all about helping kids get to grips with controlling a bike, usually in a playground setting. It’s a laugh! It’s fun, it’s riding around the playground with mates. And that’s a big point. It’s fun!

Put simply, BikeAbility is fun, does get more kids cycling to school, is a good use of money, isn’t all about roads, and the kids love it!

Playing games during this is aimed at covering a series of simple outcomes, but it’s still fundamentally bike control. Something you need to ride a bike, wherever you are. You’ll be surprised just how many kids have most of the necessary skills, but still not quite all of them. I think those who’ve ridden their bikes for decades cannot remember those initial learning moments. Some do think there’s no need for any training, just get on the bike and pedal. Well, at an early age there can be a lot more to it than that. True, it’s not much, but it’s fun to do for two hours.

Then level 2 starts getting the kids on the road. Pupils in years 5/6 enrol to do this course, often as decided by the school, and usually with around 70-80% uptake from the class. Most of them start a little nervous but end up loving it. One or two do keep those nerves through the course, and a tiny number, around 1-2%, stop. This is usually on quiet roads, sometimes a bit busier. Kids actually respond much better on busier roads.

In addition, part of Level 2 is looking at use of cycle infrastructure. This is where we get to point out how bad some of it is, and how to deal with it in all circumstances, both on-and off-road.

It’s not all about roads. It’s aimed at what the kids need for today’s cycling. Not next year’s, not a decade from now, but right now, in the environment we have. If we decide to wait until the infrastructure is built, there will be no riders left to get on it.

So what happens if we get loads of new infrastructure? We adapt the training to suit, just as it’s already being adapted. And again, this is how the Dutch deal with it. Yes, they do cycle training over the North Sea (www.camcycle.org.uk/jumpto/biketrainingnetherlands). In fact, it’s pretty clear they do something similar to BikeAbility, including being on roads, albeit with a change of focus reflecting their environment. Use a route to school and cope with the different hazards along the way. This is pretty much how Level 3 is delivered here. This will involve fewer roads (but clearly not none) and will involve the same kind of hazard perception learning that BikeAbility is all about. Hazard perception is another thing linked with BikeAbility successes (www.camcycle.org.uk/jumpto/hazardperception). So this is something that the Dutch seem keen on as well. Again, this isn’t just about motor traffic but it does form a key part.

So, is BikeAbility useful?

The final criticism that could be levelled at BikeAbility is that it gives those in charge the excuse to do nothing else. Again, this is the argument of defeat. Does anyone really think that if we stopped training suddenly we’d have people in authority deciding they need to spend time working on cycle infrastructure? No, I don’t think so. We do need to push to do it all. Cycle training for kids is not the most important thing, but it is part of the solution.

So let’s go back to those issues.

I do still get why people feel uncomfortable, as BikeAbility was born out of a vehicular cycling manual. However, it’s changed a lot since the start, and actually was never as solely focused on vehicular cycling as some people might suspect. Put simply, BikeAbility is fun, does get more kids cycling to school, is a good use of money, isn’t all about roads, and the kids love it!

We have the firm blueprint from over the North Sea, infrastructure and training, let’s get on with it.