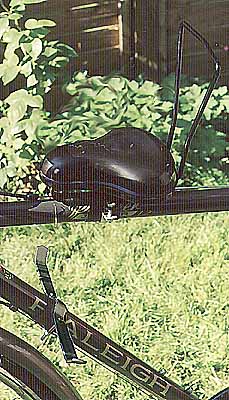 The first Sunday in June, I took our five-year-old daughter for a ride on my new bicycle. Phoebe was sitting on a saddle mounted on the crossbar – the old fashioned kind of child seat that is widely used in Cambridge. It was a lovely sunny day and we were both enjoying ourselves. Suddenly, however, the bike came to a dead halt. Phoebe was dragged off her seat and thrown onto the road: she had taken her right foot off the rest and somehow got it tangled in the spokes of the wheel.

If a car had been passing at the wrong moment, Phoebe could have been killed or seriously injured. As it was, she suffered a friction burn from the wheel. This wound will take all summer to heal. She also has a compression fracture at the base of her leg. Phoebe is still too upset by the accident to ride on any bicycle, including her own.

When my partner and I have told people who use similar child seats about the accident, we have had an interesting range of reactions. Some parents have been concerned, but more seem reluctant to admit that they are taking any sort of risk. One even suggested that the accident Phoebe had was a physical impossibility. It seems to us that this unwillingness to acknowledge dangers springs from two factors. Firstly, not to use the seat would be very inconvenient for many parents: it is an easy way to transport school-age children and allows another child to be carried at the rear of the bike. Secondly, risks are hard to judge. The undoubted fact that many people have used the seats without problem does not, however, make them safe, any more than the fact that many smokers do not get lung cancer means that smoking is OK. 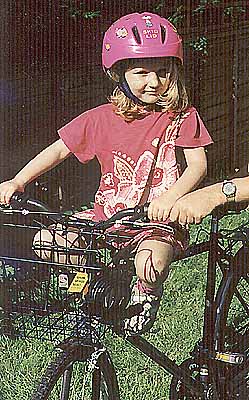 In the light of Phoebe’s accident, it seems to me that the level of risk associated with this seat is unacceptable. I would certainly advise parents against using one. If you must use this seat then there are things you can do to minimise the dangers. A spoke guard is not a magical solution but it is an improvement: I have discovered that some shops will, quite rightly, only sell the seat with a guard. The seat and footrests should be positioned as far away from the front wheel as possible.

Staff at the Addenbrooke’s Casualty Department, and at the plastic surgery clinic which Phoebe still attends, say that they often see children with feet, legs and hands damaged while riding on this kind of bike seat. The systematic collection of data about children’s accidents would contribute to a more informed debate about whether the risks are just too high.