As I cast my mind back over a packed week, it’s difficult to forget the weather. The slogan of the week became ‘It doesn’t rain much in Cambridge, except in National Bike Week.’ In fact, we were lucky to avoid real downpours at most of our outdoor events, but the heavens did open just before a number of them, and I’m sure that some people were discouraged from coming because of that.

Here’s a run-down of the events we organised.

We began the week with a ‘Bicycle Health Clinic’ outside the Guildhall. There was a potential hiccup when we discovered that the ‘Jesus Army’ bus had been promised the same space as us. We moved along the pavement, and there was plenty of room, but from a distance it did look like the ‘Jesus Army Dr Bike Clinic’. We checked about 60 bikes, and I felt that the overall standard of bikes was higher this year. We had a lot more space than last year, thanks to Jim’s superb scaffolding, and were able to work on up to three bikes at a time. Despite this, the queue got alarmingly long at times. However, everyone was good-natured, and a number joined the Campaign on the spot. 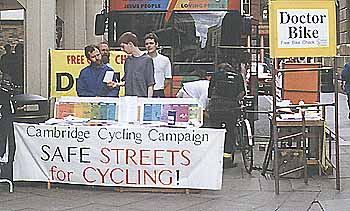 Last year’s ‘minutes to the City Centre’ signposts were hard to follow. After much thought, we decided to publicise recent cuts in maintenance budgets with a pothole mini-golf tournament. We spread 100 flag signs across the city, highlighting particularly large potholes, and invited the media to the tournament.

The Cambridge Evening News ran front-page, colour coverage on 10 June, which contrasted superbly with the other front-page article on Trinity College considering spending £1 million to widen a small section of Milton Road. The irony of the small sums for repairing minor roads didn’t escape letter writers to the paper later that week. 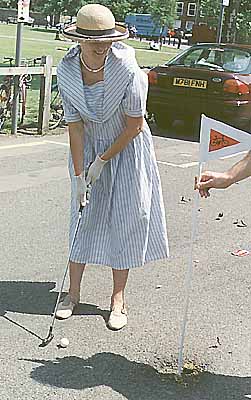 The first of our two leisurely rides was run in conjunction with the Cyclists’ Touring Club, to Anglesey Abbey for Sunday afternoon tea. I recall some torrential rain before the start, although during the ride we only once needed to shelter to avoid a downpour. I was very impressed that about 15 people braved the elements, and I enjoyed the ride and company (and the tea) enormously.

This was our other leisure ride. To celebrate our second birthday, we advertised a picnic in Grantchester. When route maps were handed out, a number of people were alarmed to see that we were going via Madingley. We agreed to set off for Madingley, with the option of taking a short cut if necessary. In fact, we cycled the full route, and arrived, hungry, at Grantchester Meadows, to be greeted by Mark and Lorraine handing out water melon. I was amazed at the spread of food. We couldn’t have had a better combination if we’d planned the menu beforehand.

Incidentally, I seem to have acquired a rather substantial knife after the event – do let me know if you’re missing one!

Wednesday was National Bike to Work Day. To celebrate, Susan and Stephen Hill, of Hobbs Pavilion Restaurant, kindly ran the second free Cyclists’ Breakfast. Well over 150 people came, and sampled toast, eggs, croissants, rolls, coffee and fresh orange juice. I spent the hour chatting to people in the queue – and really enjoyed the friendly atmosphere. It was great to meet more members, and put some faces to names. 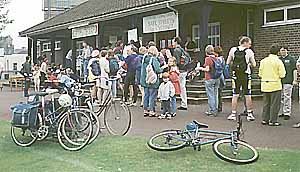 Thank you, again, to Stephen and Susan for their generosity in hosting this event.

Thanks, too, to Jim, for again supplying the scaffolding. This time, it provided extra cycle parking facilities.

I didn’t imagine that an indoor event would be affected by the weather, but as soon as Jane Alvey, from the East Anglian Film Archive, stood up to introduce the film show, the heavens opened, and she had to battle with the noise on the glass roof of Fisher Hall. Happily, the din subsided after a few minutes, and we were able to enjoy footage from the 1930s, 1940s and 1950s. The aspect I found most surprising was the number of bicycles in British cities, including Ipswich and London. It’s not too long ago that cyclists truly were the majority. Sadly, we found out later that two bikes parked outside were vandalised whilst their owners were watching the show.

Throughout National Bike Week, we sought nominations from the cycling public for awards for the best and worst changes for cyclists in recent years. The aim was to give people a chance to say what they liked most and least about cycling in Cambridge: a serious message presented in a friendly way.

By launching the nominations in the week before National Bike Week, we were able to publicise our events in advance. 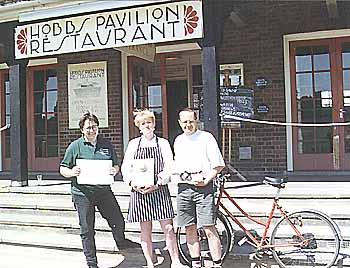 We received just over 100 nominations, and much deliberation was required to distil them to ten awards.

Six Golden Bells were awarded for positive measures for cyclists: 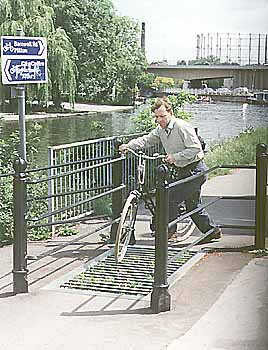 Why not ride over a cattle grid designed for cyclists?

Chocolate Chains for the not-so-good were awarded to: 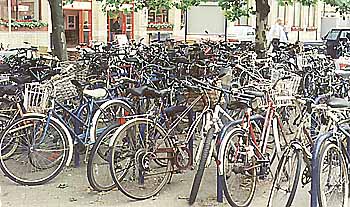 Simon Nuttall and Stina West Andersen made a great video showing all ten winners, including a demonstration of how easy it is to miss your train when you can’t find a cycle parking space.

The National Cycling Strategy target was the basis for a discussion after the awards video. The question ‘Can Cambridge double cycling by 2002?’ generated this spider diagram.

We wanted to show that there’s more to cycles than your average two-wheeler, and highlight the variety of bikes. Following an invitation in the Cambridge Evening News, a splendid range of cycles and cyclists joined us, riding from Jesus Green to Sheep’s Green: 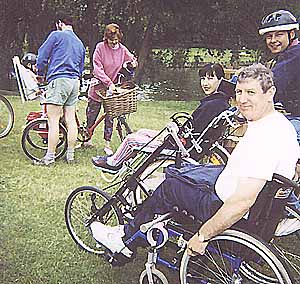 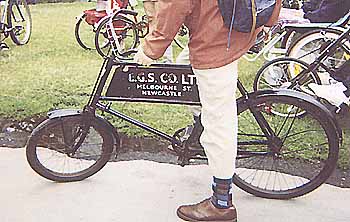 The final event of the week was a superb cycling Treasure Hunt, organised by Dave Earl and Lucy Agate. Sadly, barely enough people came along to make it worth running. However, those that did really enjoyed it, and did well with a challenging set of questions.

A big thank you to the many people who made the week possible. I’m particularly grateful to those who lugged the stall backwards and forwards to many of the events!

As for next year, we’ll start pondering and planning in a few months time. One possibility is a Cycling Fair.