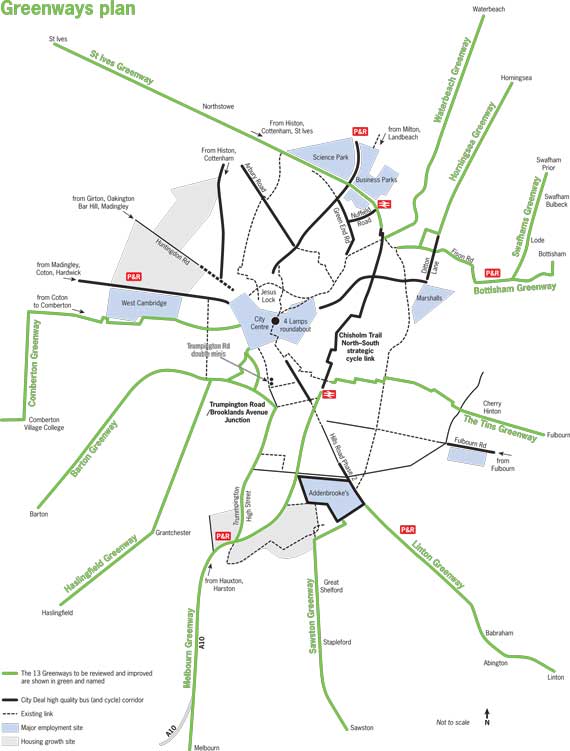 The very first meeting I went to after I was appointed to the City Deal Board was Camcycle’s monthly meeting on 1 February 2016. Given that we were approaching Valentine’s Day, I took the theme ‘please fall in love with the City Deal’. After all the headlines of the past month, it feels like our relationship with some residents is going through a rocky patch. So I’d like to repeat my message: we are trying to sort out Cambridge’s congestion, and add: we are listening to residents’ feedback, and will take account of it. And to Camcycle members I’d like to say: we are very focussed on promoting cycling throughout the city and district.

How do I prove that last bit? Easy – the very first project to be paid for by the City Deal and actually completed will be a £500,000 grant requested by Cllr Susan van de Ven to deliver a vital stretch of off-road cycleway between Cambridge and Melbourn.

Within the city, we are spending £8 million on five cycle routes: along Arbury Road; linking Cambridge North railway station to the Science Park; along Ditton Lane and links to East Cambridge; along Hills Road and the Addenbrooke’s route; and the Fulbourn/Cherry Hinton eastern access.

Plans are also in train for the Chisholm Trail which will cost £8.4 million.

On 13 October, we authorised the next stage of the Cambourne to Cambridge busway project, approving work to investigate an off-road route (and benchmarking that against an onroad alternative). If the off-road route is eventually preferred – and it will take another six months or more to determine that – it will have an adjacent cycle way along its length. And that’s not all: we also said we wanted to look at a ‘cycle superhighway’, as recommended by the City Deal Assembly, through the villages from Cambourne to Cambridge, i.e. Bourne Airfield (if it is developed), Highfields, Caldecote, Hardwick and Coton.

But much the most exciting prospect is our ‘Greenways’ project. This would be a network of high-quality – mostly off-road – cycle-paths, radiating out from Cambridge in all directions to the neighbouring villages and beyond, some up to six or seven miles away. We want to improve or create cycleways to Comberton, Barton, Haslingfield, Melbourn, Sawston, Linton, Fulbourn, Bottisham, the Swaffhams, Horningsea and Waterbeach, to complement the St Ives route alongside the Guided Busway. This is a vast, ambitious, expensive and lengthy process, currently being led by Mike Davies and his team at the county council, which the City Deal will look at partially or even wholly paying for. Delivery of this plan has in effect now commenced with the new route currently being built through the Babraham Research Campus and opening in January 2017. The whole plan will take many years but we have the ambition and a lot of money.

These are just the current projects. We are open to ideas for other ones – please suggest them. The only way we can sort out Cambridge’s congestion is by encouraging non-car alternatives – bus, cycle, pedestrian. There is a lot of talk about trams and light rail, which in a sense are derivatives of a bus (they are all 40-foot long metal containers with wheels that carry 50+ passengers) but more costly and less flexible, so we are not looking at them, nor at tunnels – which may work for cities with populations of many millions, but is far too expensive for one of 150,000. So we fall back on bus, cycle and walking. Yes, you are hearing and will hear a lot from us about buses. But we are equally keen on cycleways and cycle provision, and will spend money, time and resources on them.

So please, love us for what we are: a team that loves cycles and cycling.