A number of Camcycle members, along with other Cycling UK members from Cambridge and around the region, attended a We are Cycling UK workshop at Ross Street Community centre, the first in a series across the country.

The first item on the agenda for the workshop was a discussion of the wider cycling issues with Daniel Zeichner, Cambridge MP and Shadow Minister for Cycling, and Julian Huppert, former MP and former co-chair of the All Party Parliamentary Cycling Group. This touched on a number of issues, in particular the lack of funding from central government for cycle infrastructure.

Roxanne De Beaux ran a session about Camcycle’s experiences of forming and running a campaign group, answering questions on how best to recruit members, utilise people’s skills and gain popularity in the wider public and political sphere. Camcycle received high praise from Daniel Zeichner, who described us as one of the most effective campaign groups he knows.

The workshop addressed the three key points of the Space for Cycling campaign that it aims to get local councils to sign up to:

The first phase is to plan a cycle network. Whilst we would all hope that local authorities would create and update such a plan, and they may have internal plans for cycle infrastructure, a wide-scale strategic plan is not evident. What was suggested was essentially a ‘tube map’ for cycle infrastructure within the city and the surrounding region: look on the map and work out key points where people would like to go, and draw some lines between them. 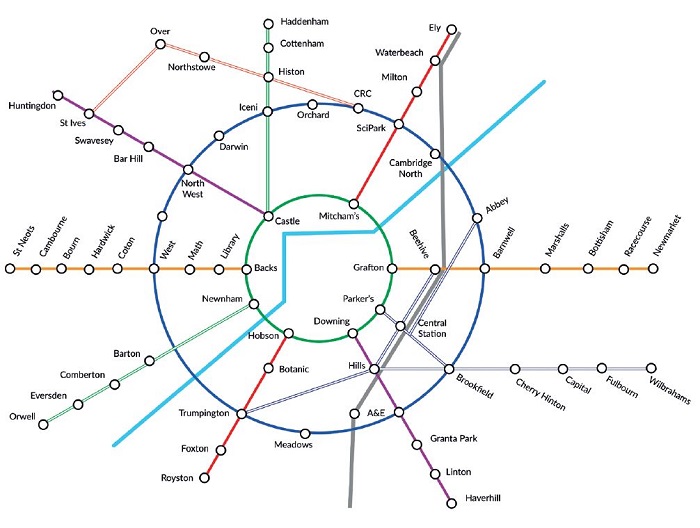 Taking inspiration from Bristol and Bath cycling campaigns which have already done this (see illustration), we decided to draw up a strategic plan for Cambridge, at least as far as the neighbouring market towns. The plan is composed of two orbital routes. The inner orbital mirrors the inner ring road and allows cycle traffic to avoid the busy city centre when its route is from one side of the city to the other. The outer orbital builds on the cycleway just to the south of Orchard Park, and the cycleway from the Cambridge Regional College to the new Cambridge North station, and extends it to connect to Addenbrooke’s via the outer ring road, and to West Cambridge via Darwin Green and North West Cambridge. It may later be possible to follow the line of the M11 and connect West Cambridge with Trumpington. In addition, the plan we came up with included radial routes along all the main roads, but particularly to connect employment sites.

The second phase for Space for Cycling is to take the plan and attract funding. There was lots of discussion about how campaign groups can attract support from local ward and parish councils and from the Local Enterprise Partnership. A fantastic example of forming relations with local employers was provided by the A10 Corridor Cycling Campaign; nearly 50 businesses, from small local employers to global multi-site corporations, signed a business letter to the City Deal Executive board members and assembly members showing support or safe cycling routes along the A10 for their employees and for the wider community.

The third phase is the building of the infrastructure. This is where national guidance is glaringly absent, a point that Julian Huppert hammered home in the morning Q&A session. To understand how infrastructure works, and doesn’t work, I led a tour of some local Cambridge infrastructure and we rated it using CycleNation’s Cycling Evaluation Assessment Tool (CEAT).

CEAT evaluates infrastructure based on asking the minimum number of questions possible. For example, we cycled to the south side of the station cycle bridge near the road restrictions and looked at how that scored. Four out of five, which is considered ‘good’. We then cycled to Hills Road where the volume and speed of traffic, together with some slightly compromised lane widths on the southbound side, resulted in a score of 3 out of 5: a ‘could do better’. Finally, we went to Radegund Road just south of Coleridge Road to look at the supposed traffic-calming measures. The cycle bypasses are very narrow resulting is a score of 2 out of 5: ‘poor’. We had a long discussion about how this road could be improved, resulting in a simple verdict – move the cycleways next to the footpaths, and formalise the car parking between a lovely avenue of trees.