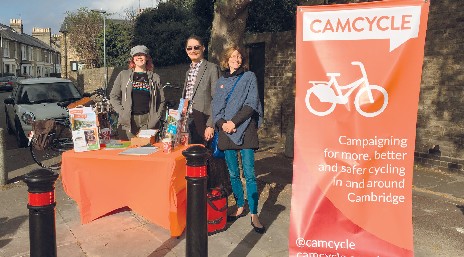 Roxanne, Hester, Matthew, Al and I took the stall bike to the Co-op on Chesterton Road for the #Cooptakethetour event, at which people cycled around six of the Co-op stores in Cambridge for the chance to win a Bobbin Bicycle.

We had a constant stream of interested passers-by, some of whom were new to Cambridge and some old friends. We met an 86-year-old man who told us he was still a member of the Campaign and had been one of the first members to join. He still follows our activities despite not being able to cycle any longer. Another Co-op customer, on seeing our new banner, said ‘Join me up straight away!’ – he didn’t want to discuss it, he just wanted to know where to sign on the dotted line.

The upgrades to our stall bike have really made a big difference. We had maps and information about bicycle lights to hand out to students and those less familiar with cycling. Our badges and stickers proved popular with students and Deliveroo riders… and kept children entertained while we chatted to their parents! We are also thinking about how to engage with event goers, especially as other events which we attended in the last couple of months, such as Milton Feast and Cherry Hinton festival, are family events… any ideas for activites are welcome.

Our stall bike gives us the opportunity for ongoing conversations with the public, keeping us in touch with the concerns and needs of Cambridge residents, both cyclists and non-cyclists. The hot topic was the City Deal and we were had lots of discussions about transport and congestion in Cambridge and just how important cycling is going to be in solving it.