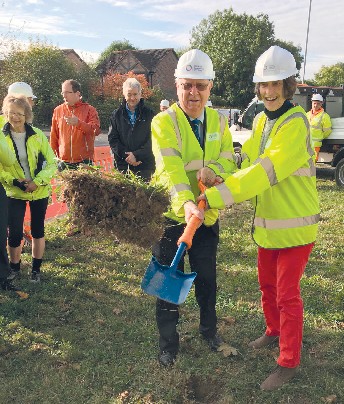 A lovely and truly down-to-earth ceremony took place in Melbourn on 24 October, as the first City Deal spade hit the ground and work commenced on the Melbourn-Frog End (Shepreth) pedestrian/cycleway (see Newsletter 127).

This cycleway, due for completion in February, should transform daily life in Melbourn. People entering the village from the north to work at places like Melbourn Science Park will now enjoy a safe link in from the A10 cyclepath.

The cycleway also means that village residents drawn to the wide array of shopping opportunities at the two garden centres along the old A10, where the new path will run, will no longer need to travel by car. Notably, both centres have a particular attraction for more vulnerable off-road users: there’s the Teapot at Phillimore with its pensioners’ specials, and the soft-play at Wyevale that invites young families. Mobility scooters and children’s bikes will now find these within easy reach.

One of the central aims of the A10 Cambridge-Royston cycle project is to minimise road crossings. The two main road crossings that are required both fall within the Shepreth to Melbourn stretch.

The first crossing is over the A10 near the Frog End junction. Frog End itself is problematic, and so a location with better visibility and no junction dynamics, a few hundred yards up the road, was chosen. This is known as the Weavers Shed crossing and it leads directly onto the old A10, as it was before before Melbourn was bypassed. After a short and peaceful ride past the Green Man pub, on a stretch called ‘Dunsbridge Turnpike,’ the route merges with ‘Cambridge Road’ – a continuation of the old A10 that leads into the village of Melbourn. 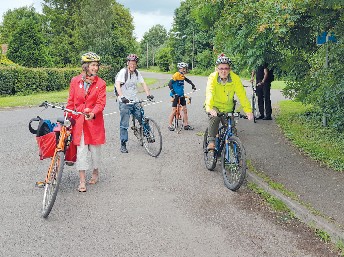 Designing the new cycle path for the west side of Cambridge Road was a fairly straightforward choice owing to the much wider verge. But a decision needed to be made about the merge point and where to create an obvious road-crossing point. With a bend in the road it was important to get this right. People using the route on a regular basis had that golden nugget of local knowledge, and so it was arranged to meet up on site with John Stanley from the County Council Cycling Team, to examine the terrain and figure out best options. This produced the detail now being put into place.

While these are promising times for new rural cycleway projects, a totally unexpected challenge comes from Network Rail at Foxton Level Crossing. If you’ve been there, you will know what a complicated mess of a crossing it is. A plan to redesign the whole thing with a £15 million bypass and bridge/underpass was recently commissioned, published, but then shelved by Network Rail, citing lack of funding.

Safe passage for cyclists is through a mechanical gate that sits in the middle of a brand new cycleway. Inexplicably, Network Rail now proposes to do away with that gate, closing the passageway. If it goes ahead this will effectively sever the A10 cycleway, in a stunning example of dysfunctional transport planning. Other than Network Rail, no one supports the idea, and one can only hope that common sense will prevail.

The overall Cambridge-Royston cycle link scheme is gradually turning from aspiration to reality. The final big funding challenge is the Melbourn-Royston segment, and this will now be our primary focus. For those awaiting completion of the Melbourn-Frog End scheme, and anxious to support efforts on the Melbourn-Royston front, please join the A10 Corridor Cycling Campaign’s second annual Silly Santa ride around Royston on 10 December (see Newsletter 124), setting off from Royston station at 10.30am (coinciding with train arrivals). This will be another chance to see the Sustrans network around Royston that would connect beautifully into the A10 network, if only funding for a bridge over the A505 can be achieved.