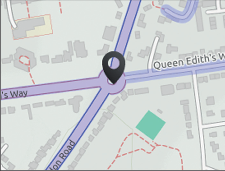 Camcycle supported a Dutch-style roundabout on Queen Edith’s Way, which was subsequently unanimously agreed on. This represents a step-change in the standard of cycling infrastructure in Cambridge and the UK. We rejected the design for the proposed cycleway as it involved too little segregation and are pleased that the design is to be taken back for further work, hopefully re-engaging with members of the public.
Cyclescape 1361

Phase 2 of the Huntingdon Road scheme 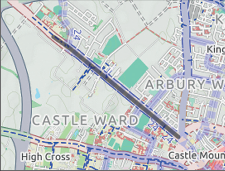 We urged that the proposed cycle lane in the door-zone of parked cars be rejected and the protected cycle lanes brought back into consideration. We are very disappointed that instead the scheme was approved, particularly when other schemes approved at the very same meeting are removing such lanes owing to the danger they present.
Cyclescape 808

Camcycle supported this cycle route which was subsequently approved – another positive link for the A10 cycling route.
Cyclescape 2633 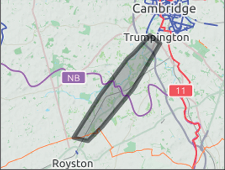 We recognised that this scheme represents a significant improvement to the current cycling conditions; however, we had concerns that the junction with Brooklands Avenue, the most difficult part of this route, is not being tackled. Keeping the car parking means that there isn’t enough room for a properly separated cycle track. We will continue to exert pressure for improvements to this junction.
Cyclescape 1067 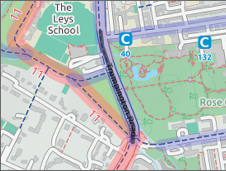 Camcycle supported the removal of the gyratory system; however, it strongly objected to the introduction of a double roundabout: a design similar to the double roundabout at Lensfield Road and Trumpington Road which is currently the most dangerous junction in the city for cyclists. We also objected to the proposed shared space because of the high level of through traffic.

Camcycle responded to this package of proposed measures as the increasing problem of congestion directly affects people who cycle.

It increases both real and perceived danger when riding amongst traffic, causes delays due to longer traffic-light cycles and adds to air pollution and noise. We responded in detail to the On-street Parking Control, Workplace Parking Levy and Peak-time Congestion Control Points proposals and supported the proposed use of trial options before proceeding to major infrastructure projects.
Cyclescape 2586

Camcycle continues to attend and significantly contribute to these meetings. Matthew Danish has developed a new approach to Milton Road including a bi-directional cycle lane on the north for access to school and a uni-directional cycleway on the south with trees to separate the carriageway from the cycleway. Re-design of junctions is key and we have proposals for the Elizabeth Way roundabout, the Union Lane-Arbury Road crossing and the junction at the Golden Hind. We’re working with other local groups to ensure a shared vision and strong voice in campaigning for a better Milton Road for all.
Cyclescape 2662 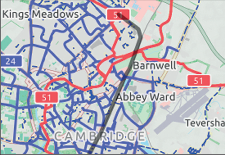 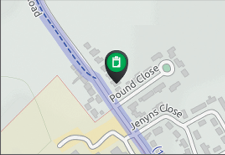 Camcycle rejected approval of this scheme on the basis that is vital to continually campaign for high quality infrastructure.

We believe that the proposed shared path is too narrow to properly accommodate the expected numbers of people walking, cycling and riding horses. Of even greater concern is the fact that both ends of the path have poor connections, leaving people at uncontrolled informal crossings of the B1102 at the edge of the villages Lode and Quy. The plans for approval are substantially worse than the option recommended by a Sustrans feasibility study and fail to address the issues which this raised. However with support from the parish councils and the district council the path has been approved.
Cyclescape 2731

Camcycle spoke at the City Council Planning Committee to reiterate our previous objection to the proposed cycling parking. We objected to a number of aspects including poor access which discriminated against cycle users with mobility issues, and double-decker racks which prevented the secure parking of tandems, cargo bikes, cycle trailers and all types of trike. Thanks to our intervention, councillors voted unanimously to reject the application, against the recommendations of the officers, on the grounds of Design, Community Facilities and Cycling.
Cyclescape 2207

We’ve since met with the CB1 developers and are pleased that the subsequently revised plans show improved access for cycles and a minimum of 5% provision for ‘non-standard’ cycles. Recent applications such as this have highlighted the need for us to update our Cycle Parking Guide to reflect the growing and changing needs for cycle parking in Cambridge.
Cyclescape 2825

Camcycle welcomes the publication of this report. We are very pleased to see recognition of the value of a network of high-quality radial cycling routes from surrounding towns and villages to the future of transport in and around Cambridge. Camcycle looks forward to working with the City Deal on the detail for these routes to ensure they achieve their full potential.
Cyclescape 2793

Camcycle has serious safety concerns arising from the chaos caused by parked vehicles, belonging to contractors working for the Revolution pub, which have blocked the contraflow cycle lane.
https://www.youtube.com/watch?v=SmPjtmfJgbQ
Cyclescape 2800