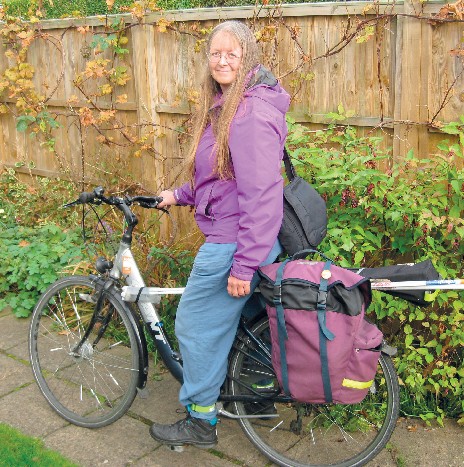 I came to Cambridge a long time ago as a student and then stayed around as I like living here and it’s a good place for working in computer software. I brought a bike here with me and have carried on cycling ever since, as it is the obvious, practical and (mostly) pleasant way to get around Cambridge and the nearby area. We used to have a car too but it sat around only being used every few weeks which probably wasn’t very good for it, so now we have just bikes. I’m very much a practical cyclist, mostly wanting to be able to get around between home, work and other things, and so my bike often transports everything from panniers full of food for us (and the cats!) to rollerskis and poles when I head off to join my rollerski club.

I first heard about Camcycle 15 years or so ago when I saw the newsletter for sale in Waterstones. I bought it and although I thought it was interesting and important, didn’t get round to actually joining until 2004 when I came across the Campaign stall at an event on Parker’s Piece. I signed up there and then, and ticked the box saying I could help deliver newsletters and I’ve been delivering a round ever since.

Volunteering obviously depends on how much time you have, but you shouldn’t be put off if you only have a little time now and again. I have helped marshal a few Reach Rides and joined our stall bike at a couple of events to chat to people about Camcycle’s campaigning. I don’t mind helping with events if we’re short of volunteers but I’m more a ‘helping quietly in the background’ person rather than being the public face.

Something unrelated to cycling but actually quite similar which I’ve been involved in for many years is science fiction conventions. They, like Camcycle, represent a community of people essentially trying to keep something they value continuing and, whilst there is a committee with overall responsibility, they also need many other people’s help, both beforehand and on the day, doing all kinds of things to make it all run smoothly. I really enjoy being a part of that, seeing how the various parts fit together and then watching people enjoy the results of it all.

I became membership secretary in 2014 when David Earl resigned to work on improving our membership systems. There was tons of new stuff to learn but David was, and continues to be, a super support. It feels great to know that the improvements we have made in the last two years have really made a difference to the efficient running of the campaign.

I’m happy that, in no small part thanks to Camcycle’s efforts, I can now cycle to the railway station after years of having to walk there because the cycle parking would be full. Our efforts to make this the best cycling provision that it can be still haven’t quite finished, as parts of that area are still a mess and every time I try to avoid the worst holes on my way home I hope that somewhere in the development plans is a commitment to resurface Station Road and that end of Tenison Road after most of the building work is done. What seem to be obviously sensible changes to Cambridge’s cycling infrastructure sometimes take a frustratingly long time to happen, and it’s very easy to feel a little depressed when finding yet another set of road works where cycle-only flows haven’t been considered at all. Having said that, I do believe things are getting better for cyclists here, and much more so than they would be without the Campaign’s involvement. Camcycle is key in ensuring we all have better cycle routes to use every day – roll on the Chisholm Trail!

I’d encourage other people to get more involved in helping the Campaign, maybe starting with something easy like delivering newsletters or helping marshal the Reach Ride for a couple of hours. With more people helping with small things we can achieve even more.

Whenever I see people out enjoying a bike ride, which in Cambridge is very often, it is a really great feeling knowing that I am helping to keep them pedalling.