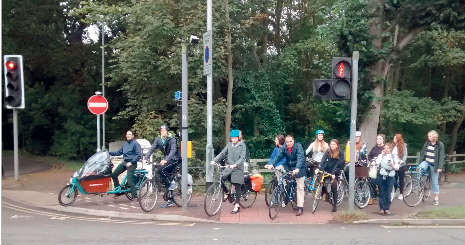 Every weekday morning, I have a pretty pleasant bike ride from Cambridge station to north west Cambridge. I choose to go out via Brooklands Avenue, crossing Trumpington Road (the A1134, a 7-way intersection, if you include bike paths and Chaucer Rd), heading along the bike path alongside Vicar’s Brook, across to Lammas Land, and up Driftway to the next six-way (bike paths from Lammas Land as well as Barton Road (A603) and Newnham Road/Granchester Street). Where I head next isn’t really important, it’s just those two intersections I want to talk about.

Both are well signed and have good visibility and, crucially, a clear bike-only phase of the traffic lights that allows cyclists to cross without any of the other vehicles using any of the ingress/egress roads at those junctions interfering. The bike lanes in and out are fairly clear and (mostly) fairly well separated from the roads there too.

However, at 8.45am on a weekday, as my photographs show, Cambridge is the victim of its success at encouraging cycling for all kinds of journey. There’s simply not the space on either side of Trumpington Road, and certainly not on the island a quarter of the way across, for all the bikes, with child carriers/trailers and so on. Nor is there time for everyone to navigate the mega-crowded crossing safely. Something has to change – one idea might be just (for that time of day) to extend the length of the green phase for bikes. Another might be to clear some of the clutter on the island and have a single-stage crossing phase across to encourage some bikes to stay on the pavement at the Brooklands Ave side rather than squeeze on to the island.

Then at the Newnham Road crossing, there’s an onslaught of bikes coming down Barton Road, including many kids, heading towards the Driftway, which means they stay to the right (not left) in passing all the people going the other way – and typically, again, they are still cycling off the footpath onto the intersection, filling up the whole crossing, while cyclists are trying to get across the other way – maybe mark the road with two sets of dashed bike lanes to show where people should segregate, and also, extend the green light phase for bikes during this period.

I’m not a road planning expert, but something clearly needs refining, now that the evidence is that the existing cycling facilities are fantastically successful beyond their design!