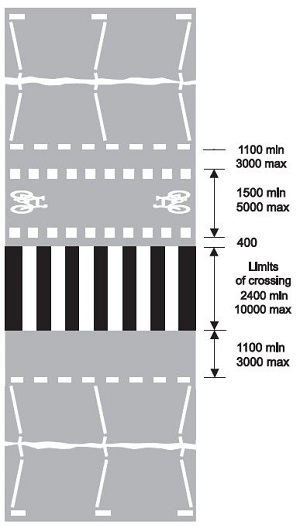 A bit of background: a new parallel priority crossing (or cycle zebra) was installed on Huntingdon Road in April this year. This new sort of crossing had just become legal with the publication of the new Traffic Signs Regulations and General Directions (TSRGD). The crossing is part of the cycleway scheme that runs on the citybound side of Huntingdon Road between Girton College and Richmond Road. Located between Oxford Road to the north and a floating bus stop to the south, it was introduced to facilitate the crossing movements of cyclists heading to and from Oxford Road and Storey’s Way. The alignment of the approaches to the crossing slows down cyclists so they do not enter the crossing at speed. A central refuge (wide enough to accommodate trailer bikes) allows two-stage crossing.

There seem to be a few issues with the crossing – not least with cyclists not recognising its cyclist priority status! There have been stories of cyclists shouting at fellow cyclists to walk their bikes over the crossing. The Department of Transport is not running an awareness campaign as they have in the past when rolling out new crossings. Consequently, the location and characteristics of the crossing, and the approaches, play an important part in helping drivers realise they need to give way at the crossing. And these elements are not quite right at present.

On the approaches, the 2.1m-wide cycle lanes run right up to the Give Way lines of the crossing. Visually, the cycle lanes make the crossing very wide, so drivers may not notice cyclists or pedestrians waiting to cross on the shared-use foot/cycleway. Citybound drivers may also find that the alignment through to the floating bus stop further dissociates the footway. Equally, the Belisha beacons on the shared-use footway are outside the line of vision of drivers. Crucially, the absence of Belisha beacons on the central refuge diminishes drivers’ perception of the crossing.

There have been Elephants’ Footprint markings at the informal crossing just east of Storey’s Way for many years – following the installation of the parallel priority crossing nearby, some users are now confused by the status of this crossing point.

The ‘Pedestrian and Cycle Crossing’ sign (Diagram 544, TSRGD) that can be used at parallel priority crossings does not make it obvious that the crossing is a priority one. Drivers, looking at the Zebra part of the crossing, may expect cyclists to dismount. That said, there are quite a number of Zebra crossings round the city where cyclists regularly cycle across (Chesterton Road, near Jesus Lock is a good example) so local drivers should be used to it. This was also one reason we thought Cambridge was ‘ready’ for the new style of crossing. The second parallel priority crossing in Cambridge is on Arbury Road (part of Phase 1 of the Cross City Cycling schemes) replacing a zebra crossing where cyclists regularly cycled across. Driver compliance at the new crossing seems pretty good – it probably helps that it’s in a 20mph zone, the carriageway is 5.6m wide and the crossing is single-stage.

‘Ultra-visible’ Zebrite Belisha beacons have been installed on the footways and central refuge of the Huntingdon Road parallel priority crossing. We shall be monitoring the crossing and talking further with the Department for Transport.