Please write to Cambridgeshire County Council supporting the planning applications for both the Abbey-Chesterton foot/cycle bridge and Phase One of the Chisholm Trail. A small number of people are being very vocal in their opposition to aspects of these applications and have submitted a formal petition so it is important that those who support sustainable transport and want improved access to our valuable green spaces also make their views known.

Contrary to what appears in our printed Newsletter (text below) we’ve had an update on the process for the Chisholm Trail planning application. Although dated 16th September, we only received a copy on the 22nd. This letter is now on our ACTION page, and we will add to that and send a further message to all members when we’ve clarified the position. The crucial thing is that the formal closing date for the Chisholm Trail, Phase One is now 7 October. Even if you submitted a letter of support regarding the bridge a further letter is required for Phase One!

The link to the Phase One documents is: https://t.co/wKS5cRqWdB. You can email the planning officer at: planningdc@cambridgeshire.gov.uk. Please quote refs C/5005/16/CC (the bridge) & C/5007/16/CC (phase one) 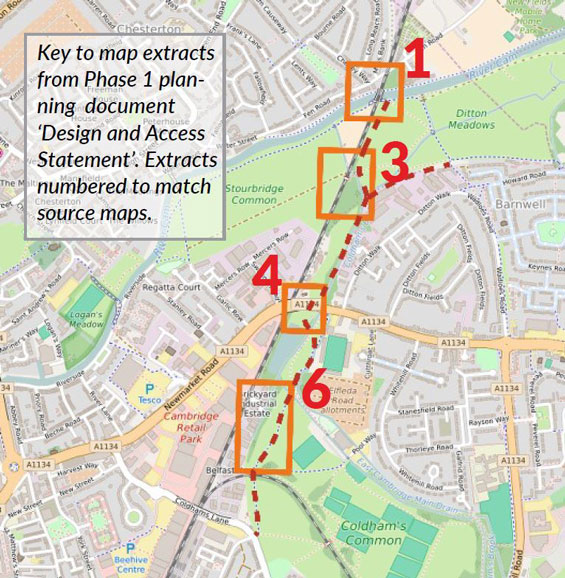 You can comment online on the applications. Go to the county council’s website and search for planning applications ref C/5005/16/CC (the bridge) and C/5007/16/CC (Phase One of the Chisholm Trail). When you find the correct application, look for ‘Comment on this application’ at the end of the box containing the application details. Or you can email planningdc@cambridgeshire.gov.uk.

Please see: www.camcycle.org.uk/chisholmtrail for information about the proposals and their benefits including our formal letter in support, and www.camcycle.org.uk/action for our suggestions of key points to raise. On Cyclescape, thread 2635 has members’ discussions of the Chisholm Trail planning application and thread 2663 has details of the Local Liaison Forum held on 5 September.

At the time of writing a Development Control Forum is scheduled for Monday 10 October with a decision being made on both the bridge and the Trail at the meeting of the Joint Development Control Committee – Cambridge Fringes on 16 November. Both of these meetings are open to the public and we encourage Camcycle members to attend. Please see our Campaign Diary for details and keep an eye on our weekly updates for further information.

A significant part of the ‘Phase One’ plan is a 3.5m-wide surfaced shared-use path from the bridge as far as Coldham’s Lane, with the major construction being an underpass beneath Newmarket Road near the Leper Chapel.

The best and easiest way to understand the plan and detail of this route is in the ‘Design and Access Statement’ submitted as part of the planning application, from which the following plan extracts were obtained. We urge you to study this when you write to support the application. This can be found on the county council’s website, as with making online comments search for C/5007/16/CC. Alternatively see www.camcycle/action.

The first part will be a new path along the margin of Ditton Meadows next to the railway embankment, then curving away from Coldham’s Brook to meet the old Barnwell railway siding. The bridge on this old siding will be used to cross Coldham’s Brook but with one branch of the path following the siding back to reach the existing path to Ditton Meadows. The main path will continue along the edge of the pastures owned by Cambridge Past Present and Future (CPPF) to Newmarket Road.

Landscaping and mitigation will be considerable in this area, with Barnwell Wood (a wedge of land between the old sidings and the existing rail line, a hectare or so in area) being managed for the benefit of nature.

In addition, although CPPF had concerns about the early proposals, it will be possible to improve the access and environment around the Leper Chapel to the significant advantage of CPPF, who are now supportive, subject to certain conditions. 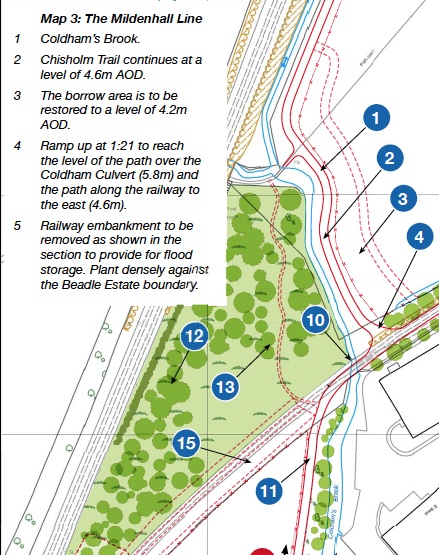 I’d always had dreams of a link beneath Newmarket Road leading to an eventual link all the way along the rail corridor without a single major road crossing. The proposed subway is expensive but so valuable and it is only the City Deal that can finance such an undertaking. This will be 5m wide and will have an open and direct aspect at each end, sloping gradually down towards the lake, and giving a far more pleasant and far safer alternative to the adjacent Toucan crossing. The improved access to the Leper Chapel will be significant: I know of people for whom disabled and wheelchair access will be extremely welcome. The current proposal is to minimise disruption by constructing the complete subway on the land to the south of Newmarket Road and then, over a long weekend, rolling it into place using the sort of arrangement often used to replace railway bridges.

Although the rough piece of land adjacent to Newmarket Road, the railway and Barnwell Lake is part of the green belt, there should be an opportunity for a small café (and loos). Compared with the huge P&R sites built on green belt sites, and the fact that this site is almost surrounded by the ‘Sheds’ of Newmarket Road, a recycling yard and the football ground, this would give many advantages on a small parcel of land that very few even realise exists! Not only would it provide a focus for leisure trips on foot or bike on the Chisholm Trail, but provide useful facilities for those enjoying Coldham’s Common and Ditton Meadows, without impinging on the valuable habitats. It would also give some much-needed and almost essential facilities within a very short walk of the Leper Chapel, enabling CPPF to run more events there.

The next section over Coldham’s Common, a path which is narrow but asphalted, will need to be widened to 3.5m to cope with increased flows on foot and bike. As this area is a registered Common such a change will require the county to make a ‘Section 38’ application under the Commons Act 2006 to the national ‘Planning Inspectorate’ in Bristol. The route will be slightly realigned in a couple of places to give better visibility and, to help mitigate the extra hard surface on the narrow sections over the common, the very wide section near Coldham’s Lane will be reduced to the standard 3.5m.

So I’ve described the route, but what sort of flows of people do the consultants expect in the long term? The ‘Demand Forecasting’ report by Atkins, which accompanies the planning application, is complex, dealing with the whole Trail, including from the Northern Guided Busway, the bridge and as far as the Guided Busway south of the station. It also covers trips generated by future developments such as Wing, expansions at the Cambridge Biomedical Campus and the Northern Fringe (East). It suggests current developments will result in some 1,700 trips each day by bike and a further 500 on foot on the middle section, which includes Coldham’s Common, with higher numbers near the new river bridge. Once all proposed developments listed above are complete these could double!

Section 5 states that modelling also excludes leisure and school trips that become viable because of the Trail! These will not be insignificant.

There are some 40 pages of this documentation, and I noted that in the ‘sensitivity analysis’ flows could be some 20% higher, but that the ‘speed’ of those cycling seemed to have little effect?

We need to take care with use of the word ‘speed’. This route will be attractive to users not because you could cycle fast, but because once the route is complete there will, unlike with a motor or bus trip, be few interruptions to journey time, which also will be ‘predictable’.

If you can cycle at 15kph, a 5km trip on the route should take little over 20mins and would not vary much in time from day to day. An existing bike trip through town with all those stops and starts would take more time and use much more energy. Bus or car will never beat the peak-time reliability of cycle trips on the Chisholm Trail!

Because this forecasting seems to exclude many ‘non work’ trips, and to ignore the effects that the reliability of trip time can have on modal split, I’ll be surprised if we don’t exceed even the higher predictions of flows for both those on bike and on foot within ten years of full opening of the route.

Protecting the flora and fauna? 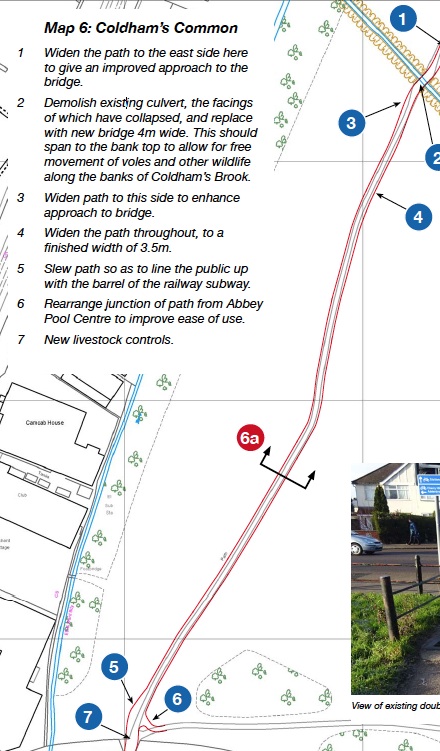 The strongest objections about these proposals have come from those wishing to protect the environment (definitely with a small ‘e’). Long ago I was a volunteer helping restore the derelict Basingstoke Canal. Strong concerns were expressed about ‘damage’ to the environment and ‘power’ boats. Now some 40 years later much of it is a Site of Special Scientific Interest (notified by Natural England for its extremely diverse aquatic flora, including five nationally scarce species) and its associated habitats have been enhanced, with the creation of a wonderful linear park some 32 miles long.

Construction here will make a short-term mess, but it will also give a golden opportunity to improve and enhance habitats, one which will certainly be taken. Scrub will be cleared to support grassland habitat and native species hedges planted.

Although the public will not have access to the ‘pastures’ on CPPF land, the new path will provide vital access, allowing for grazing and correct ecological management of the habitat and there will be other mitigation measures that will enhance the whole area. Ecological and landscape surveys have been carried out and tree protection plans and planting schedules prepared. These are all vital to ensuring that construction is carried out as sensitively as possible and that all mitigation measures are the most appropriate to enhance the area. Wetland areas will also be created as part of a flood compensation scheme.

It seems that this scheme has been like a red rag to a bull for some people. I’ve even heard that some see this scheme as an excuse for a Guided Busway over both Ditton Meadows and Coldham’s Common at a later date! It should be obvious that the opposite is true. This path takes the only possible line in this area. If plans come forward to dig up the Chisholm Trail and replace it by a Guided Busway, I’ll be the first to the barricades!

The Chisholm Trail is important

Getting planning approval for this will result in a massive improvement in accessibility for those on foot or bike, at less expense to the local environment than those few people opposing the scheme are trying to scare people into believing.

Without the route many of those predicted 6,000 users will need to drive or take a bus. You NEED to help by writing to your local councillor in support NOW!