If you want something changed, join a movement. If you want change now, get involved

I started cycling before I can remember but the early memories that I do have involve cycling into trees quite a lot. And falling over on the gravel in the primary school car park whilst trying to go as fast as possible.

I have two older brothers and a father who ran the local cycling proficiency tests so being a good cyclist was sort of expected. I mainly cycled within my rural village in Nottinghamshire, between my house and my friends’ houses, the sports centre, and playgrounds. Cycling to the local town was impossible owing to high speed roads and no cycle paths. I mainly rode the bus 6 miles to secondary school and back every day. I had one serious accident when I was young where I destroyed the back of a Mini, breaking my collar bone and knocking myself unconscious for an unknown period of time in the process… some people says this accident explains a lot.

I became a member of Camcycle in 2009. The county council was proposing to improve the cycle infrastructure near where I live. I had submitted a response but thought that whilst my individual voice would be heard, my requests and suggestions would be stronger if they were amplified by the voice of a thousand people. If you want something changed, join a movement. If you want change now, get involved. 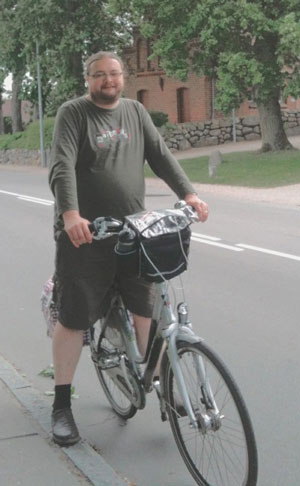 I live to the north of the city, so much of my time is concentrated on things on this side, mainly because I have everyday knowledge of the good bits, and the bad bits. The A14 cycle-ways, Northstowe and Waterbeach are three big issues, but I have also helped with Milton and Histon Roads.

I’ve helped to marshal the Reach Ride, doing the annual count of cycles. Oh, and I have a weekly column called ‘Life in the cycling lane’ in the local newspaper, where I blog about life as a cyclist in Cambridge… nothing helps change more than keeping people informed.

My main bugbears are junctions, especially ones installed by developers who only care about movements of metal boxes, and those designed when the car was going to be the king of the road. I’ve been modelling junctions using some micro-simulation software and whilst nothing has happened yet, I’m hopeful that this work will transform some of the worst places in the Cambridge into cycling excellence.

Our Camcycle community is knowledgeable but at the same time very friendly. I was welcomed into the world of campaigning, even though I’d never done any campaigning before. My suggestions were listened to, my involvement supported and I was quickly educated on the various issues. Not only am I now part of a group of interesting and interested people but also I get to talk with lots of other people in the area, councillors and local developers, organisations such as Cambridge Past Present and Future, and local groups explaining their concerns. It is all very stimulating.

So, my thoughts on the future of cycling in Cambridge? Well, the number of journeys done by cycling simply has to increase and become safer, otherwise we’ll have complete gridlock.

We need more places to park our cycles securely, clearer route signs and way-marking, and, unsurprisingly, I want safer junctions. I think Cambridge needs to shine the light on how to design a city for people rather than cars, and we need to push as quickly as possible towards that.

I would like Camcycle to grow into an organisation that can advise anybody in the UK on how to transform cities and rural areas to become cycle-friendly. We are the cycling experts in Cambridge, with all our knowledge and motivation we can become the experts in the UK.

The sense of achievement when you see something being done to improve or increase cycling in the city that we have campaigned for is palpable. I get a huge buzz when cycling down the new Cambridge Kerb cycle lanes on Huntingdon Road or Hills Road. Just being able to park my cycle safely, or indeed to even find a space to park, at the station is a revelation.

I want that same buzz when I cycle along the Chisholm Trail, or cross a dangerous junction safely, or easily park my cycle at the shops. Where would you like to improve next? Really, ok, well then get involved and we’ll make it happen.

Please post on cyclescape thread 2053 or send an email to contact@camcycle.org.uk to discuss ways in which you would like to help.