We had a great response from Camcycle members about what they thought of their bike lights – thank you! The general consensus was that ideal lights are easy to use and bright enough to feel confident that other road users easily see them. One make of light that had a high number of advocates was CatEye. 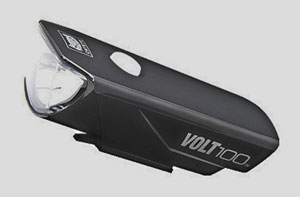 Cross-over safety light/front light but not bright enough for fast cycling in non-urban settings. It is mid range in terms of price. Comments include praise of its useful beam shape that lights up the ground immediately in front of the wheel as well as further forwards; however, its side visibility is not great.

The cheaper ‘CatEye Loop’ is a safety light rather than a front light. It uses a normal battery rather than a rechargeable USB battery and has two modes, constant and flashing. It lasts 30 hours in constant mode and 50 hours in flashing mode). It has a quick elastic mount that can adapt from 22-35mm and good visibility as throws light over a wide angel not just straight forward.

Higher up the price scale, the ‘CatEye 800’ is certainly a front light, bright enough for seeing where there are no street lights rather than just being seen by other road users. It is USB-charged and has an indicator to show when the battery is low. It has 5 settings, 3 constant and 2 flashing. Comments include difficulty when trying to release the light and that it is quite heavy.

Members seem regularly frustrated by their bike light attachments, from struggling with ‘typically fiddly and fragile velcro and ‘O’ ring mounting systems’ and ‘messing about with awkward straps and poor clips’ to fighting with a light’s rubber straps ‘which is very difficult with cold fingers’. Two readers have designed their own solutions to such poor designs. 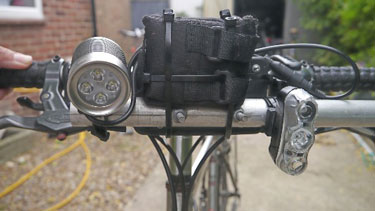 Ed Wood uses the KLICKfix system (used on many removable baskets and handlebar mounted touring boxes). Ed’s Fluxient 1600 lumen light is mounted alongside its charger and a cheap CatEye for backup and ‘flashing’ mode (a pairing which he finds useful on a combination of lit and unlit roads). A Klickfix handle bar mount stays attached to the bike and an ‘Adaptor plate for basket’ attaches to the mounting tube.

Henry Gomersal uses magnets fixed with Sugru (a moldable glue that cures into a durable silicone rubber). He fixes one side of the magnet to his bike and the other to his bike lights (details of this can be found at www.sugru.com). He suggests that everyone in a household use this system, and have the polarity the same way around, so that all the lights are interchangeable. The new model of Henry’s Moon Comets now has an integrated rubber strap which means that they are less easy to fit magnets to; he has found lights that have a slide-on fitting are most easily re-purposed as a magnet mount. 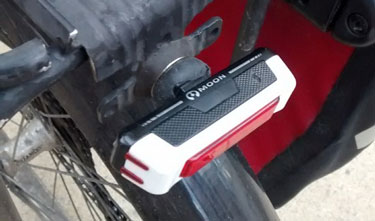 For advocates of dynamos the fact that they didn’t have to deal with attachments was one of the key benefits, others being not having to remember to take their lights or carry them around when the bike is parked. Douglas de Lacey is one such fan. ‘I don’t think you can beat dynamo lights; there are such good ones on the market today and the batteries never go flat. Lights on 24-7, you never need to worry about lighting up.’ Newer versions have ‘stand lights’ which stay on for a few minutes once bike has stopped, meaning that they are much safer when waiting at traffic lights. When properly set-up the drag is almost unnoticeable, meaning you can have them running day as well as night; useful on grey, overcast days.

How bright is too bright?

In much of Cambridge, the presence of street lighting means that the main purpose of bike lights is for being seen, rather than seeing. The effect on other road users is an important issue. Anna Langley explains, ‘Bike lights were once dull, insipid things, and now they are piercing points of light that are unbearable for many of us to look at. In winter, I often get home with my eyes streaming with tears from the onslaught.’ It’s not just how bright they are, but how they are positioned. Another Camcycle member emailed about bright LED lights which were said to be ‘mounted naively on the front of the bike so that they point directly forward, not down and forward, They are really good at blinding me. I cannot see the rider at all even when there are street lamps, just a super-bright LED which leaves imprints on my retina. In Germany (where I lived previously) there is a requirement that lights point down as well as forward, just like on a car’.

However, we did have a number of responses from users of high-end, high-powered lights who value the increased confidence of knowing that cars have seen them. Phil Wiggles-worth uses a ‘Diablo’ Exposure front-light which is ‘competitive with car lights on brightness’ and ‘costs more than many Cambridge bikes… with the Diablo I get significantly more polite behaviour from oncoming traffic, which treats me like something they don’t want to hit. I cycle on the road, rather than on cycle paths, and expect to be treated like a car.’

Unsurprisingly, one point that all our respondents were in agreement over is the worry and concern that it causes all road users when unlit cyclists pass by. Cambridge police run operation Lights Instead of Tickets (LIT), launched in 2012 in response to complaints about the high number of cyclists without the correct lighting for night-time cycling. Camcycle advised on this initiative which sees cyclists without correct lights being issued with a LIT ticket instead of an automatic £30 fine. The fine is waived if a receipt for bike lights is presented within seven days at Parkside police station. In 2015, 350 tickets were issued.

John Cooter emailed saying ‘I believe that there is clear case for a nudge approach, i.e. opting out of having lights rather than opting in. Some of the latest generation of LED bike lights are so small that it surely would be within the wit of cycle manufacturers to incorporate them in frame designs with no significant addition to weight for those who really want a lightweight steed. As a shorter-term solution, maybe we should campaign for local cycle shops to supply all bikes fitted with lights as standard?’

With thanks to all our members who contacted us with their views and opinions. 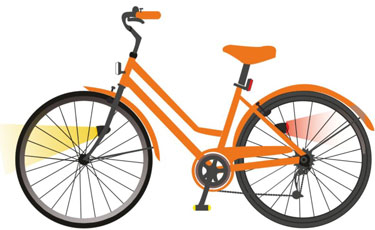 When being ridden between sunset and sunrise your cycle MUST have white front and red rear lights lit.
It MUST also be fitted with a red rear reflector (and amber pedal reflectors, if manufactured after 1/10/85). White front reflectors and spoke reflectors will also help you to be seen.
FLASHING lights are permitted but it is recommended that cyclists who are riding in areas without street lighting use a steady front lamp.