All winter, I’d been becoming increasingly annoyed by the fading, latterly totally faded, paint at both the junction of St Andrew’s Street and Emmanuel Street and then the invisible contra-flow cycle lane along Emmanuel Street. It was becoming more and more dangerous as, although I’m sure experienced bus and taxi drivers knew it was there, for people new to the route, they were just faced by an oncoming, illegally cycling-the-wrong-way down a one-way­street cyclist. 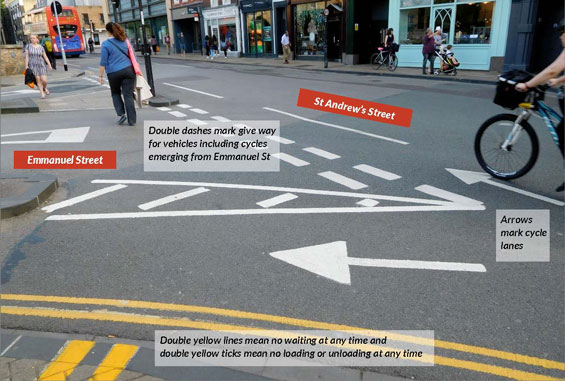 I’d not got around to contacting the council to complain, as my feeling is, that (unlike with the city council) with the county council, which is in charge of Highways, it’s an utter waste of time and effort, as you get sent around the houses and then they conclude there is no problem and nothing needs doing!

So I was amazed when I cycled up Downing Street and turned left onto St Andrew’s Street one evening in June, to do my normal right turn into Emmanuel Street towards Midsummer Common, to find new paint – correctly applied and showing everything that needs to be shown.

Using this route over the summer, I’ve found driver behaviour markedly improved. Bus drivers who can’t get past a poorly stopped bus do now mostly feel the need to give way. There is less idiotic stopping in the cycle lane too.

I think what this goes to show is, where drivers (and cyclists) have an ‘excuse’ to disobey the rules of the road, as the markings or signage are so poor that ignorance probably is a defence, actually they will disobey. The simple expedient of repainting faded road markings surely has to be a pretty cheap way for our cash-strapped councils to do some very effective fixes. I can think of quite a few other places, not exclusively for cycle facilities, where such a repaint would be very welcome and would improve road safety.

This raises another matter – there is no point having a facility of any kind unless it is maintained. There is so much discussion about new things, but often what makes life better is actually properly maintaining what is there already. I remember when this area was two-way for all traffic with bus stops on both sides of Emmanuel Street, so, whatever your views of this facility, I can tell you it was a game-changer at the time, and, if maintained, still works pretty well. Now it is clear again to all but the wilfully ignorant that Emmanuel Street is one-way for motor vehicles and has a contra-flow cycle lane. It is also much clearer to those exiting Emmanuel Street onto St Andrew’s Street that there is a cycle lane through/across the junction. Of course this would be far clearer if there were distinctive red surfacing for the cycle lanes through the junction. However, this replacement paint is a very welcome cheap quick-fix.