During July planning applications should have been submitted for both the Abbey-Chesterton cycle/foot bridge and the section from Cambridge North station to Coldham’s Lane, and we’ve also had the first public Local Liaison Forum (LLF) for this project.

The application for the bridge is public and although the formal closing date is 1 August, comments (in support…) can normally be submitted later. As I write this, the section to Coldham’s Lane has yet to be validated.

This is a great time, and unlike other City Deal projects there only appear to be a few odd detractors. Should all go well, these first sections could be open within two years.

I have not found time to read all the documents, but detractors try to suggest there is no demand for the bridge, and current routes are sufficient! The demand forecast in the planning documents suggests some 6,000 trips each day when planned developments in the area are complete, and I think this could be an underestimate, as they suggest a mere 750 will transfer from other modes (bus and car). Such predictions are often made on ‘average’ trip times, and it is the utter reliability of cycling and walking that can make such modes an attractive alternative to the car in a congested city. Cambridge North station, the Wing development, and the proposed expansions within the Cambridge Northern Fringe (East) will all contribute to new trips in the area.

The bridge itself will weigh some 85 tonnes, and be 4.5m wide. This is about the same width as the bridge at the main station but the effective width will be more, as the sides will splay out rather than being vertical. At the LLF some amusement was caused when it was said that it was proposed to ‘launch’ the bridge from the Fen Road side. People clearly thought of a big ‘splash’ (perhaps accompanied by a bottle of champagne?). In fact this is a now common method of bridge construction so as to avoid the need for a huge crane, an especially tricky issue adjacent to a ‘live’ railway, or obstruction of the navigation. A lightweight ‘nose’ is attached to the front, and the bridge pushed out over one abutment, with a temporary counterweight at the rear. A slightly similar method has been suggested for the Newmarket Road, where the underpass may be ‘wheeled in’ requiring closure only over a (long?) weekend, replicating the construction under the railway in Royston at Christmas 20112. Who says engineers do not innovate? 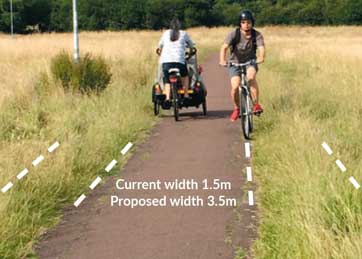 Some City Deal projects have, justifiably, been criticised for failing to consider the landscape. I feel these projects should, overall, enhance the landscape. Both Barnwell Wood (scrub off Ditton Meadows and used by rough sleepers) and a section of the old Mildenhall railway line (technically an operational rail line to the oil depot!) will be landscaped and form part of accessible open space. The route will go over land adjacent to Coldham’s Brook to reach Newmarket Road, with the area around the Leper Chapel getting some landscaping and new hedging.

On Coldham’s Common, to preserve the rural feel, the path will remain unsegregated but will be widened to 3.5m. The current path is just 1.5m wide, with the edge breaking up. Along the route cycles have gone ‘off-line’ to avoid other users where the tarmac path is too narrow to take the flows of those on foot or bike. The alignment of the new path will be slightly changed in a couple of places to improve sight lines. No significant changes to the existing lighting will be made.

If you’ve time to read nothing else, it is the ‘Design and Access’ statements which normally give the best non-technical overview.